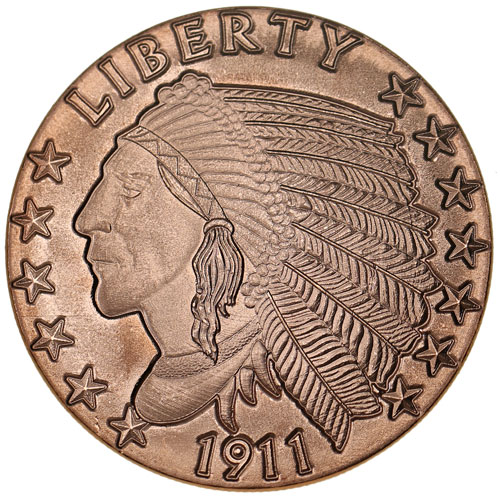 America’s gold coins from the late 19th and early 20th century are a treasure that have largely been lost to the world today. Starting in 1933, the US government mandated the collection and melting of all circulation gold currency to bolster federal reserves in the midst of the Great Depression. As a result, stunning coins such as the Incuse Indian Gold Coins became rare collector’s items. Today, those images are still available though on 1 oz Copper Incuse Indian Rounds.

These coins were referred to as the Incuse Indian because of the nature of the coin’s design. Each one marked the first time the US Mint had featured a sunken design field pressed into the surface of one of its products, rather than a raised striking of the design.

The reverse features the stoic image of a bald eagle standing atop his arrows, with an olive branch surrounding them. The phrases “E Pluribus Unum” and “In God We Trust” feature on the copper rounds, but the words “United States of America” from the coin are not included, and the face value along the bottom is replaced by the phrase “1 oz .999 Fine Copper.”

If you have questions, Silver.com associates are waiting to help. Feel free to contact us on the phone at 888-989-7223, chat with us live online using our website’s chat feature, or submit your questions via email.