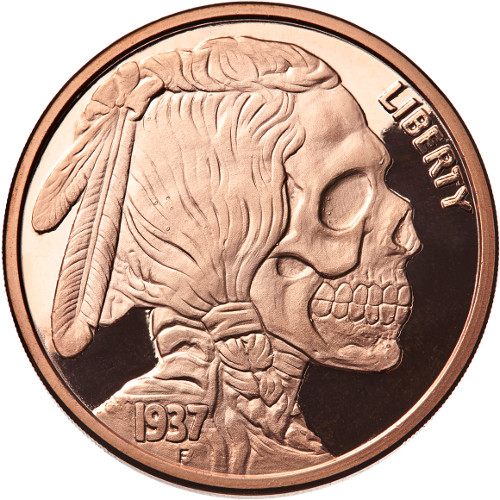 James Earle Fraser’s Buffalo Nickel design is one of the most iconic in the history of American coinage. Designed in 1913 and featured on the nation’s five-cent piece until 1938, it has become known as one of the greatest in American history and currently features on the American Gold Buffalo, a 24-karat gold coin from the US Mint. Right now, the coin serves as inspiration again in the design of the 1 oz Copper Indian Skull Round, yours to purchase online at Silver.com.

The United Snakes of America collection of silver and copper rounds includes five new designs in total, and is meant to represent the dark underbelly of the federal government in the United States of America. The first design reimagines James Earle Fraser’s Buffalo Nickel (1913-1938), with Mr. The’s Indian Skull on the obverse and a truly unique image on the reverse.

Spanish engraver Paolo Curcio brings the Indian Skull to life with the 20th century five-cent design of the Buffalo Nickel as his inspiration. Curcio’s design reflects the basic elements of Fraser’s Buffalo Nickel, but changes significant features to honor the tenets of this new United Snakes of America collection.

In particular, he captures the mistrust of the federal government among Native American tribes by transforming the Indian Head design of the original Buffalo Nickel to a Indian Skull, which is indicative of the manner in which Native American tribes were swindled of their land and left to live a harsh life on reservations.

On the obverse of the 1 oz Copper Indian Skull Round is the image of the Indian Skull from Mr. The. It features the same imagery as Fraser’s right-profile portrait of a Native American chieftain, but reproduces it as a skeletal figure who’s been stripped of life and freedom after thousands of years on the North American continent.

The reverse of the 1 oz Copper Indian Skull Round bears a depiction of the Heraldic Snakes of America. Similar in appearance to the heraldic eagle from the American Silver Eagle, this design instead features a multi-headed snake behind the national heraldic shield with its many heads reaching out in various directions.

In total there will be five designs in the United Snakes of America collection from Heads or Tales Coin Company, so be sure to check back with Silver.com for those future releases.

If you have any questions, please feel free to contact Silver.com at 888-989-7223. Our team members are also available online using our live chat and email features.