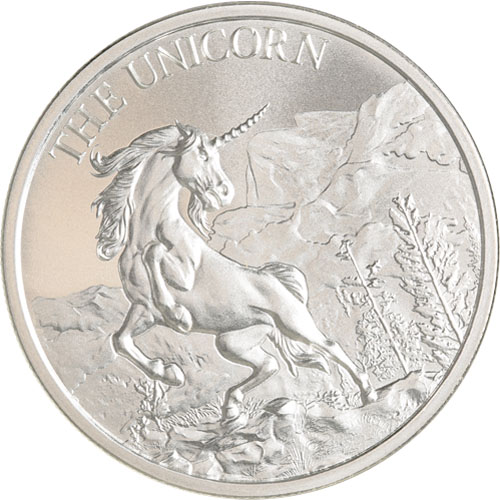 The Cryptozoology Collection of silver rounds from the Intaglio Mint catalogs the many creatures that mankind has spent generations arguing over the existence of in reality. Figures such as the jackalope and bigfoot have appeared in the series, and now another well-known beast of folklore appears in the collection. Right now is your chance to purchase a 1 oz Silver Intaglio Mint The Unicorn Round online at Silver.com.

Each of the 1 oz Silver Intaglio Mint The Unicorn Rounds in this listing is part of the mint’s Cryptozoology Collection. The rounds feature protective packaging for shipping and include engravings of the weight, purity, and metal content on the reverse face.

The first accounts of the Unicorn in human history date back as far as the 8th century BC. At this point in time, knowledge of the Unicorn’s existence came from seals used in the Indus Valley Civilization on the Indian subcontinent. Many modern scholars believe the beast’s depictions at the time may have been inaccurate interpretations of the auroch, a type of large, wild cattle that once roamed much of Europe, Asia, and North Africa.

Unicorns were often depicted in ancient seals and artwork in a profile relief, which left the door open to the concept that unicorns didn’t really exist but were rather the result of misidentification. Because the animals were depicted in profile relief, it was possible that the artist left out the existence of a second horn. This lead to the assumption that a single-horned beast existed.

On the obverse of the 1 oz Silver Intaglio Mint The Unicorn Round is a depiction of the beast that many Greek and Western philosophers came to accept as a possible animal. Greeks never referred to the unicorn as a mythical beast, but rather registered it in natural history texts as they believed it really existed in India. This design captures a powerful unicorn standing on its hind legs taking the common form of a horse with a single horn. Some European folklore depicted unicorns as goat-like beasts with a single horn and a beard.

The reverse side of Silver Intaglio Mint The Unicorn Rounds features the mint logo. The Intaglio Mint’s logo is a Romanesque column in the shape of the capital letter “I,” and is surrounded by a beaded ring and the mint name immediately, with a sunburst radial design behind that. The outer edge includes the weight, purity, and metal content of the round.

If you have any questions, please don’t hesitate to ask Silver.com customer service. Our team members are available to you at 888-989-7223, online using our live chat, and via our email address.