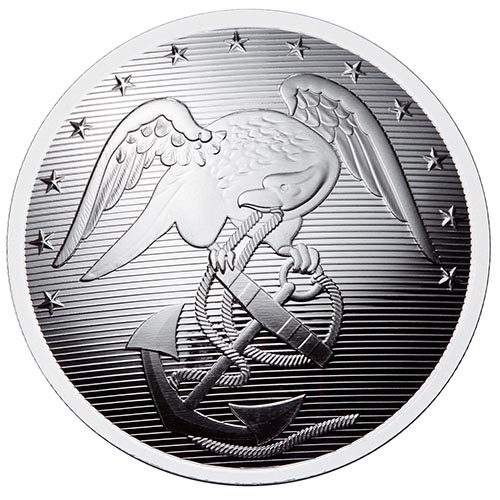 On land, in the air, and at sea, the United States Marine Corps forms the most diverse and multi-dimensional fighting unit in the United States Armed Forces. Historically a part of the Department of the Navy, the Marine Corps operates as it sown, distinct service branch within the Armed Forces and has its own uniformed service chief – the Commandant of the Marine Corps, a four-star general. Right now, the 1 oz Silver Marines Button Domed Round is available to you online at Silver.com.

All 1 oz Silver Marines Button Domed Rounds in the United States Armed Forces collection from Anonymous Mint features a convex striking. These blanks have a curved surface on one side that reinvents the common concept of silver rounds with a beautiful convex design field. Each one ships in a protective capsule and includes an individually numbered Certificate of Authenticity.

On the obverse of the 1 oz Silver Marines Button Domed Round you’ll notice the insignia found on Marine Corps service uniforms. This button depicts a bald eagle with open wings as it clutches onto an anchor with its talons, while its beak holds the rope of the anchor. There is a half-circle of 13 stars above the head of the eagle.

The reverse of the United States Armed Forces silver rounds features the Great Seal of the United States. This image is often used on government documents, including military insignias, passports, and even the one dollar bill (as of 1935). It includes the eagle supporting the national shield, with 13 arrows in one talon and an olive branch in the other.

If you have any questions, don’t hesitate to contact Silver.com. Our customer service team is available at 888-989-7223, online using our live chat, and via our email address. Don’t forget, you can track precious metal prices using our silver prices chart at any time!