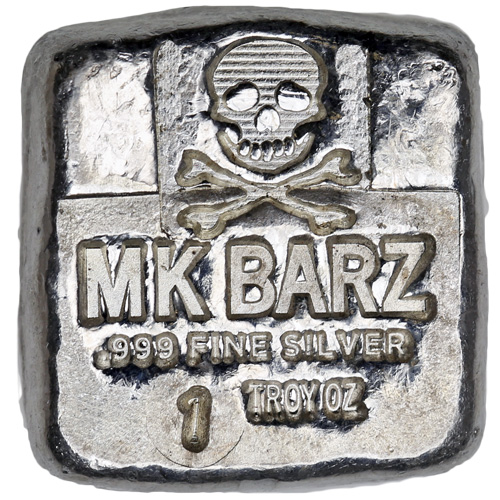 It’s hard not to overstate the value of silver in the modern era, but with precious metals rising and demand increasing for silver products, there are various mints reacting with brilliant new designs. MK Barz is one of a small, but growing, group of refineries producing truly unique products for investors and collectors. Today, the 1 oz MK Barz Silver Hand Poured Pirate Square is available with Jolly Roger design online at Silver.com.

Piracy has taken place for centuries now, dating back to English aristocrats. In 1577, Sir Francis Drake was considered to be the “personal pirate” of Queen Elizabeth I, sailing under the title of “sea dogs” under license by the British to attack Spanish shipping.

The Barbarossa Brothers were famous for their antics along North Africa’s Barbary Coast in the Mediterranean Sea, where they often plundered papal galleys and Sardinian warships. It wasn’t until 1516 that a nation, the Ottoman Empire to be precise, acted to rein in the pirates. Of course there are countless other pirate tales, from Blackbeard in the Caribbean to Somali pirates targeting modern freighters off the Horn of Africa.

On the obverse of these 1 oz MK Barz Silver Hand Poured Pirate Squares you’ll find the image of the Jolly Roger. Often depicted as just a white skull and crossbones against a background field of black, the Jolly Roger sometimes featured a tri-corner hat on the skull’s head with an eye patch over one of the eyes.

The use of the term Jolly Roger as it pertains to pirate flags came from A General History of the Pyrates, which was published in Britain in 1724 by Charles Johnson. Johnson cited two famous pirates of the day as using the name Jolly Roger in reference to their flag: Bartholomew Roberts in 1721 and Francis Spriggs in 1723.

MK Barz is a refinery located in Los Angeles, California that opened in 2014. The refinery focuses on the production of silver bars and other bullion products with a minimum silver content of .999. The company was founded by an individual with 35 years of experience grading and collection American coins.

Please don’t hesitate to reach out to Silver.com. You can contact us on the phone at 888-989-7223, chat with us live online, email us, or visit our website where you can find the price of silver today.