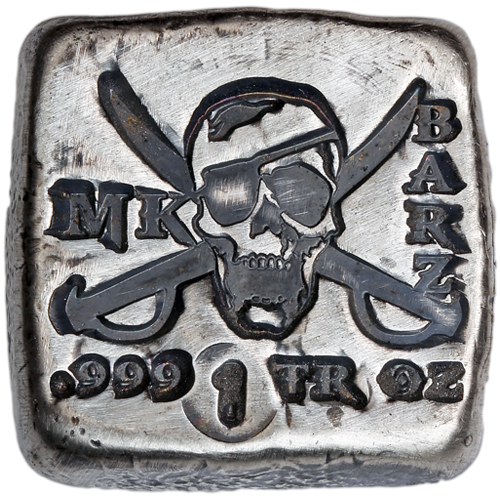 Most people think only of the Caribbean when they think of buccaneering pirates, but in reality, pirates have been a plague upon civilization for more than 500 years. The threat continues to this day in certain corners of the world. From the glorified image of pirate life comes the 1 oz MK Barz Silver Pirate Square, available today on Silver.com.

Piracy has taken place for centuries now, dating back to English aristocrats. In 1577, Sir Francis Drake was considered to be the “personal pirate” of Queen Elizabeth I, sailing under the title of “sea dogs” under license by the British to attack Spanish shipping.

The Barbarossa Brothers were famous for their antics along North Africa’s Barbary Coast in the Mediterranean Sea, where they often plundered papal galleys and Sardinian warships. It wasn’t until 1516 that a nation, the Ottoman Empire to be precise, acted to rein in the pirates. Of course there are countless other pirate tales, from Blackbeard in the Caribbean to Somali pirates targeting modern freighters off the Horn of Africa.

On the obverse of each 1 oz MK Barz Silver Pirate Square is the image of a skull, wearing a bandana on its top, with a pair of swords crossed behind it. The swords are known as corsairs and were named after the earliest French pirates who sailed under the authority of the crown in France to attack enemy shipping in the Mediterranean.

The reverse of all these rounds feature the engravings of MK Barz, and the square’s weight, metal content, and purity. Each one of these 1 oz. MK Barz Silver Pirate Squares is a hand-poured and hand-stamped product with a one-of-a-kind appearance, and no two are exactly alike.

MK Barz is a private, family-owned and operated entity located in Los Angeles, California. The private mint opened in 2014 with a specialization in producing silver bullion products. The company’s primary owner has 35 years of experience grading and collecting US coinage.

Please don’t hesitate to contact Silver.com if you have any questions. Our customer service team is available on the phone at 888-989-7223, online using our live web chat feature, and via our email address.