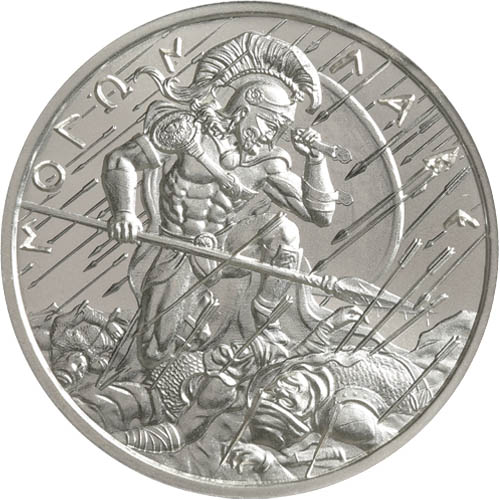 Intaglio Mint’s Molon Labe collection of silver rounds is one of its most impressive. The series features three distinctive designs and is in keeping with the mint’s focus on one-of-a-kind designs, especially those influenced by the classical era. Right now, 1 oz Silver Molon Labe Rounds with the Type III design are available to purchase online at Silver.com.

Each of these 1 oz Silver Molon Labe Rounds are available to you with a protective plastic flip. Multiples are available in tubes of 10 or 20 rounds. The design found on the reverse matches that of all other releases in the series, but these 1 oz silver rounds have the third design of Spartan warriors influenced by the phrase molon labe. Rounds in this collection are available in 1 oz and 2 oz silver, with proof and antique options available.

Molon labe was famously uttered by King Leonidas of Sparta during the Battle of Thermopylae. Though remembered largely for the sacrifice of Leonidas and his 300 Spartans, there were about 1,000 other Greek soldiers involved in the battle. Unfortunately, the opposing Persian force is said to have numbered near 100,000.

On the obverse of the 1 oz Silver Molon Labe Round is the image of a Spartan soldier. He is depicted on a knee with his left hand holding his shield overhead to protect him from a volley of Persian arrows. His right hand holds a long spear, a crucial weapon for the Spartans in their phalanx tactic. At the feet of the Spartan lay the bodies of dozens of Persians already slain by the Spartan army.

King Leonidas led the independent city-state of Sparta. Though it would typically fight alone, when faced with an existential threat, the city-states of Greece would band together. Leonidas led the charge to try and hold off the advancing Persian Army. Even though he knew he was outnumbered and the Persian king gave him a chance to surrender and live, Leonidas is reported to have responded with “molon labe,” a phrase which means “come and take it.” The statement was made in defiance of the offer to surrender and challenged the Persians to come take the weapons from his soldiers’ hands.

The reverse of all 1 oz Silver Molon Labe Rounds includes the Intaglio Mint logo in the center. The primary background has a radial sunburst design and the outer edge of the field has a stippled background bordering the round’s edges.