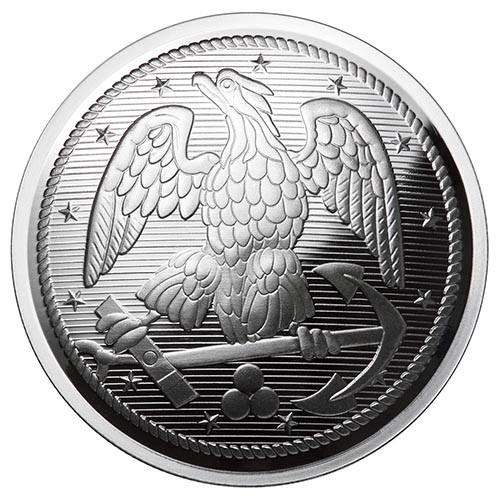 There is no maritime, naval force in the world larger than the United States Navy. Formed as the humble Continental Navy to try and fend off the vaunted British Navy, today the US Navy is a symbol of American pride and power that emanates around the globe. One of the five releases in the United States Armed Forces silver round collection from Anonymous Mint, the 1 oz Silver Navy Button Domed Round is now available to you for purchase online at Silver.com.

Originally founded as an entirely sea-based fighting force, the modern United States Navy has become a global sea and airpower force. The US Navy played a small role in American military power until the American Civil War. The blockade of Confederate coastal areas and control of US rivers showcased its true potential.

Of course, it was World War II that brought the US Navy into its own and ushered in the era of the aircraft carrier. Today, the US Navy operates the world’s largest aircraft carrier fleet with a total of 11 in service, one in the reserve fleet, and two modern iterations under construction. The aircraft carrier often forms the largest projection of US force around the globe and is the first to deploy when rapid regional responses are required.

The obverse of the 1 oz Silver Navy Button Domed Round includes a design akin to the emblem of the United States Navy. It features an eagle with wings spread open looking to its right and clutching a horizontal anchor. The outer border has a roping design, while the eagle itself is encircled by 13 stars and has 3 cannonballs below its figure.

On the reverse of the United States Armed Forces Silver Rounds you’ll find the image of the Great Seal of the United States. This design features on countless government agency emblems and documentation, in part or in its entirety. This particular creation includes the American bald eagle supporting the national shield and holding a bundle of 13 arrows in one talon, and an olive branch in the other.

Anonymous Mint created the United States Armed Forces Series of silver rounds, and production was completed at the Osborne Mint. With roots dating back to the 1830s, the Osborne Mint is America’s oldest operating private mint.

We encourage Silver.com customers to contact us on the phone with questions. You can call us at 888-989-7223, or connect with us online through our live chat and email. Check out the current price of silver on our website as well!