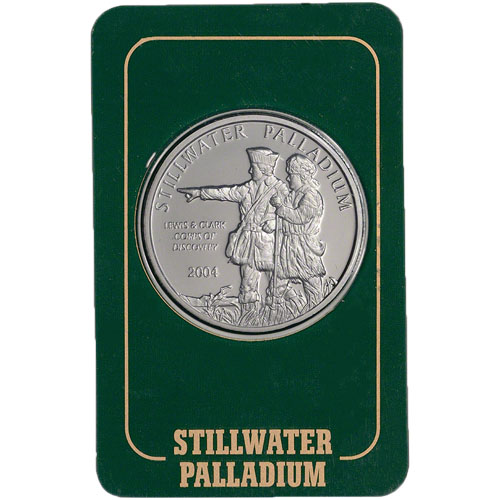 Any quantity available for $24.99 per round over spot!

Palladium rounds are a rarity in the precious metals field. Palladium bullion coins have been issued by various nations at different points in time during the last three decades, while palladium bars remain the most common option. Stillwater Mining Company issued a celebratory palladium round in 2004 that is available to you now. Right now, 1 oz Palladium Johnson Matthey Stillwater Rounds are available to purchase online at Silver.com.

Palladium is primarily mined from one of four major deposits around the globe. There are two in North America, one each in the United States and Canada. The other two deposits of naturally-occurring palladium are found in South Africa and Russia. The deposit in the United States is located in southeastern Montana and is known as the Stillwater Complex. The Stillwater Mining Company manages the field, extracting and refining platinum and palladium from the site.

The obverse side of 1 oz Palladium Johnson Matthey Stillwater Rounds includes a depiction of Lewis and Clark standing together as they look out over the land and visually survey what they can see. The right hand of Lewis is extended toward the geographic features on the horizon as Clark looks on.

Launched in 1804, the expedition of Lewis & Clark was commissioned by President Thomas Jefferson to explore, survey, and map the lands the United States acquired from France as a result of the Louisiana Purchase.

On the reverse of 1 oz Palladium Stillwater Rounds is the image of an American buffalo as depicted from the Buffalo Nickel. The coin’s design was created by James Earle Fraser in 1913 and this palladium round includes a replication of that image with a bison standing on a mound of dirt.

If you have any questions about these beautiful palladium rounds, please don’t hesitate to ask. Silver.com customer service is available to you at 888-989-7223, online using our live chat, and via our email address.