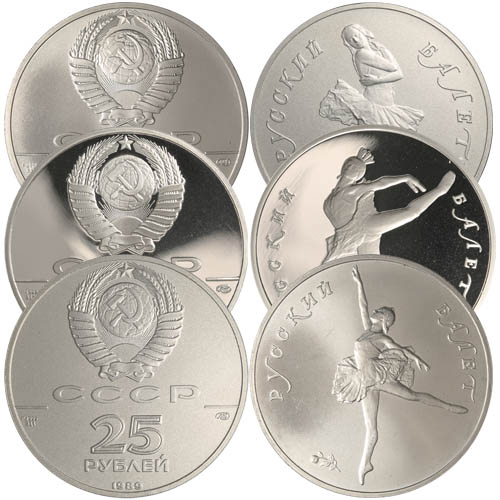 Coins from the Russian Federation and the former Soviet Union are not very common in Western nations, but the Palladium Russian Ballerina coin is still available to modern investors. Available from the Moscow Mint between 1989 and 1995, the coin featured Soviet designs on its reverse even after the fall of the Soviet Union. Now, 1 oz Palladium Russian Ballerina Coins are available to you for purchase online at Silver.com.

The history of organized ballet companies in Russia dates back to the Imperial era of the 18th century. Peter the Great is responsible for the wide adoption and popularity of the ballet in Russia. He opened up the isolationist empire to the influences of the West and sought to improve upon them to develop a sense of Russian nationality and culture.

Over the next three centuries, Russian ballet has grown to become a respected cultural icon. Beginning the early 20th century, Russian ballet performances spread to Europe and eventually the United States.

On the obverse of 1 oz Palladium Russian Ballerina Coins is the image of a graceful dancer. The Moscow Mint issued new designs of the ballerina on the obverse each year, so you may receive various different designs when buying palladium coins through this listing at Silver.com.

The reverse side of Palladium Russian Ballerina Coins includes the face value of “25 Roubles” inscribed, along with the name of the “Soviet Union” in Cyrillic. The coins maintained the hammer and sickle design representing the Soviet Union even after the fall of the empire and the nations change to the Russian Federation in the early 1990s.

These 1 oz Palladium Russian Ballerina Coins are available to you in Brilliant Uncirculated condition with protective plastic flips. This random year listing means that your coins are chosen at random based on availability when your payment is processed. We cannot guarantee a specific date mark or corresponding design. Likewise, we cannot guarantee different designs and date marks if you buy more than one.