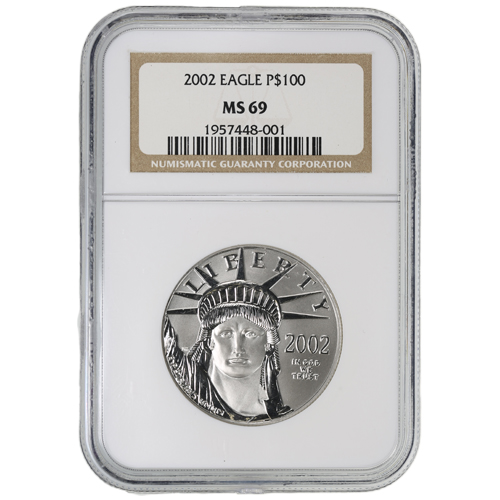 The nation’s official platinum bullion coin is the Platinum American Eagle, part of the larger American Eagle series of coins from the United States Mint. Released in 1997, the coins were regularly produced through 2008, but have been beset by platinum shortages in recent years. Today, you can purchase a 1 oz Platinum American Eagle coin in near-perfect condition from varied years of production online at Silver.com.

The onset of the Great Recession in 2008, coupled with immense increases in demand for the Silver American Eagle pushed the Platinum Eagle bullion coin to the sidelines in production at the US Mint. From 2009 to 2013 there were no bullion versions of the Platinum American Eagle struck.

This occurred again in 2015 after the coin’s 2014 return, but this had more to do with the lack of planchets for striking the coins. Platinum’s value has risen immensely in recent years, but this is due largely to the increased use of platinum in other industries, which pinches the supply for precious metal production.

Each 1 oz Platinum American Eagle coin in this listing is in near-perfect condition. Coins in this condition exhibit full, original mint luster and a maximum of two minor detracting flaws. These flaws are limited to minuscule hairlines and contact marks, and found only outside of the primary focal areas of the coin.

On the reverse of the 1 oz Platinum American Eagle coin is Thomas D. Roger’s Eagle Soaring Above America design. This was used on the 1997 proof coin, as well as all bullion versions of the coin to date. That makes this design the only one to ever appear on both the bullion and proof reverse faces in the same year.

Please feel free to reach out to Silver.com. Our team members are available on the phone at 888-989-7223, on the web using our live chat feature, and via our email address.