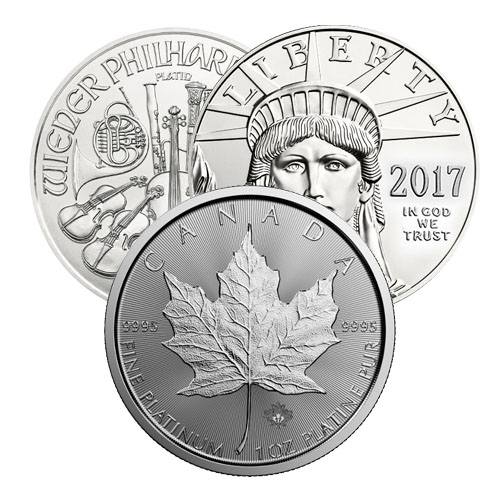 Any quantity available for $69.99 per oz over spot!

Platinum coins are growing in popularity quickly in the 21st century. In the 1980s, there were just a handful of platinum coins available to purchase, with the Royal Canadian Mint’s Platinum Canadian Maple Leaf standing out as the most visible. The Perth Mint’s platinum coin programs began in the late 1980s, and the 1990s saw the US Mint follow suit with the introduction of the Platinum Eagle. Today, random 1 oz Platinum Coins are available to you online at Silver.com.

Platinum prices plunged in the early 2000s and demand for platinum bullion coins sank as investors turned to traditional metals such as gold and silver. While there were a few coins available at that time, there’s been a more recent boom in platinum coin production as the demand for platinum in other sectors rises and creates interest in the metal as an investment option.

Through this Silver.com listing, you can purchase random 1 oz Platinum Coins. The coins available to you in this listing come from random years of issue and the mint and condition of the coins is varied. You could receive coins in perfect condition or ones with damage. Likewise, you may receive several different designs or all the same when you buy multiples. Silver.com cannot guarantee a particular coin design, condition, mint of issue, or date mark. All coins are chosen at random when your payment is processed.

The Platinum American Eagle debuted from the United States Mint in 1997 and saw nearly a decade-long halt in the production of the bullion version of the coin in the mid-2000s. In recent years, demand for platinum has returned though. The result is the introduction of coins such as the Platinum Austrian Philharmonic and Platinum Somalian Elephant in 2016, as well as the Platinum British Britannia coin in 2018.

Please feel free to contact Silver.com if you have any questions. Our customer service team is available to you at 888-989-7223, online using our live chat service, and via our email address.