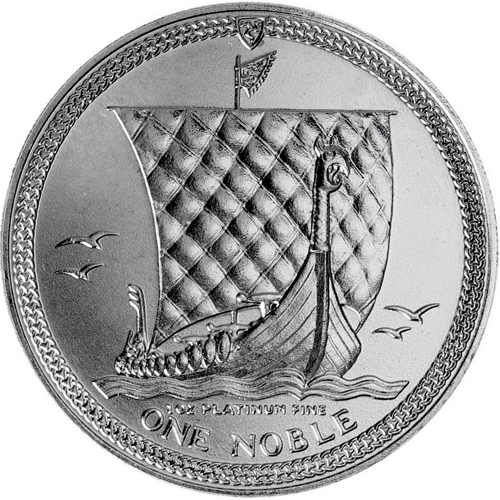 Platinum products are gaining popularity right now with platinum prices edging higher than in previous decades. While they often lag behind gold and silver in popularity, the value of platinum is high enough that mints around the globe are bringing back platinum programs as investors and collectors seek out more options. Right now, Silver.com offers the 1 oz Platinum Isle of Man Noble Coin in BU condition.

Isle of Man is a small island located in the Irish Sea between the eastern coast of Ireland and the western coast of Britain. The island was first settled as far back as 6500 BC, but no long-term settlements were established until the 9th century when the Vikings began to settle the region. Known then as the Kingdome of the Isles, the Isle of Man remained a part of Norway with its kings serving as head of state until the 13th century.

For more than 500 years the leaders of Scotland and England battled for control of the Isle of Man, which had been established as a part of Scotland in 1266 with the signing of the Treaty of Perth. Today, the small island is part of the greater United Kingdom, with Queen Elizabeth II serving as the head of state.

The obverse of the 1 oz Platinum Isle of Man Noble Coin features the familiar right-profile portrait of Queen Elizabeth II. This image is a third-generation depiction of Her Majesty not often found on coins today because the Isle of Man Platinum Noble was only in circulation from 1983 to 1989.

The reverse side of each coin features the image of a Viking longboat in honor of the brave sailors and explorers from Norse lands who established the first permanent settlements on the island. Engravings on this face include the coin’s face value.

Each 1 oz Platinum Isle of Man Noble Coin in this product listing is a Brilliant Uncirculated specimen. Coins in BU condition exhibit no signs of wear and tear, though you may notice minor imperfections such as breaks in the luster, spotted surfaces, or contact marks from the coining process.

The Popjoy Mint of Surrey, England struck these coins for the Isle of Man between 1983 and 1989, and the specific year of issue you receive with your purchase depends on the availability at the time your order is fulfilled.

Please direct your questions to Silver.com at 888-989-7223, connect with us online using our live chat, or simply send us an email with your inquiries.