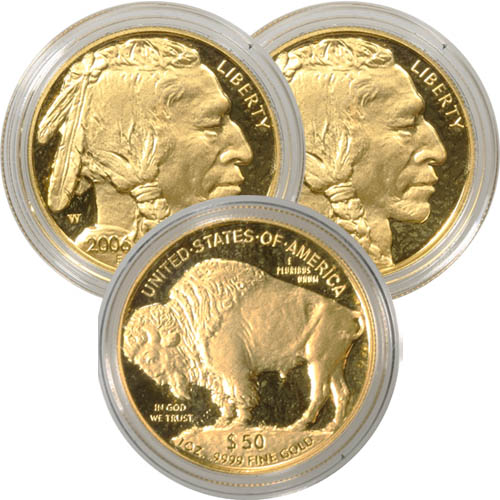 Any quantity available for $111.99 per coin over spot!

The purest gold coin issued by the United States Mint on an annual basis is the Gold American Buffalo. These 24-karat gold coins debuted in 2006 with bullion and proof versions, and since that time the gold bullion coins have been released in each year. Today, 1 oz Proof Gold American Buffalo Coins are available to you online at Silver.com from random years of issue.

Gold American Buffalo coins are available only in 1 oz gold as a bullion option and in 1 oz gold as a proof option most years. The 2008 release year featured fractional-weight proof gold versions of the coin, but the following recession and lack of availability for gold blanks during the Great Recession led to the cancellation of fractional weights in the years to come.

All 1 oz Proof Gold American Buffalo Coins are available to purchase today from random years. The coins are housed in protective capsules, but do not include a US Mint commemorative box as offered originally. Silver.com cannot guarantee the date mark on the coin you receive in this purchase. We also cannot select a particular date mark for you or ensure that you’ll receive varying date marks if you buy more than one gold coin.

On the obverse of 1 oz Proof Gold American Buffalo coins is a depiction of a Native American figure. This individual was created through the combination of facial characteristics from several different tribal elders of the early 20th century and was created by James Earle Fraser.

The reverse face of Proof Gold American Buffalo coins features a depiction of a buffalo. Also known as an American bison, this figure is based on Black Diamond. The buffalo shown here was inspired by Black Diamond, a creature that resided in the Central Park Zoo in New York City during the early 20th century.

All Proof Gold American Buffalo Coins are produced by the United States Mint with a “W” mint mark. The highest mintage year for the Gold Buffalo came in 2006 on its debut with the lowest mintage figure coming in 2015.

Please feel free to reach out to Silver.com with your questions. Our customer service team is available to you at 888-989-7223, online using our live chat, and via our email address.