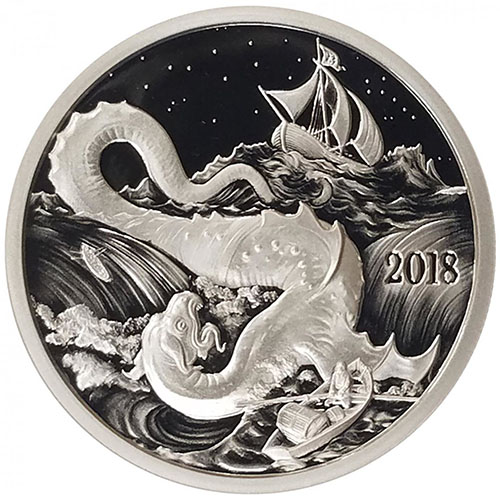 For the 1 oz Silver Proof Leviathan Finding Silverbug Island Round there is a mirrored finish on the design, providing a mirrored appearance for the background field that contrasts with the design elements. Additional versions available in the Silver Leviathan Round release include a bullion version in BU condition and an antique polish option.

The leviathan is mentioned along with the land-dwelling behemoth monster in the Hebrew Bible, with most mentions coming in the Book of Job. The term behemoth was historically used to refer to a “herd” of land mammals, leading some to use the descriptions in the bible and the term to assume behemoth was a hippo and the leviathan, a female sea monster, a crocodile.

In reality, no one knows exactly what the leviathan was as a specific creature. The obverse of the 1 oz Silver Proof Leviathan Finding Silverbug Island Rounds have the design of a sea serpent, a leviathan which is imagined as a dragon. The image is based in part on Gustave Dore’s 1865 artwork known as The Destruction of Leviathan, capturing the moment the god Hadad kills the leviathan.

The Finding Silverbug Island rounds are a product of North American Mint, which was founded by William J. LaMere Sr. in 1986 in New York.

We encourage Silver.com customers to call us with questions about 1 oz silver at 888-989-7223. You can also connect with us online through our live web chat and email address.