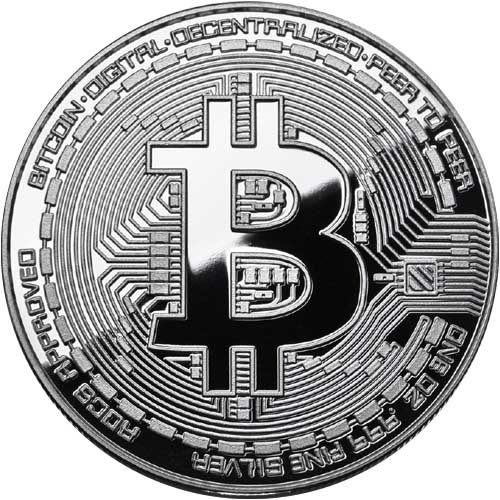 When it comes to making purchases online, most transactions take place digitally backed by a foreign reserve bank currency such as the US dollar, British Pound Sterling, or Euro. Introduced in 2009, Bitcoin shakes off that trend by offering people a form of virtual currency that stands on its own with no bank or government behind it. The 1 oz Proof Silver Bitcoin Commemorative Round gives physical form to this virtual currency with a collectible round, available here today at Silver.com.

Bitcoins were introduced in 2009 by Satoshi Nakamoto, a name that most now know to be an alias. The true creator of Bitcoin remains unknown today, but the purpose of the virtual currency is clear. It’s a peer-to-peer platform that is decentralized and beyond the control of central banks and governments around the world.

You can acquire Bitcoins through online marketplaces known as Bitcoin exchanges, where Bitcoin is bought and sold using different foreign currencies. Individuals can then buy and sell goods and services using Bitcoins, and it all takes place anonymously with no transaction fees or need for a bank account.

On the obverse of the 1 oz Proof Silver Bitcoin Commemorative Round is the image of a letter “B” with two vertical lines struck through it. This is the symbol of Bitcoin, and is very similar to the appearance of the US dollar’s “$.” This design was introduced in 2010 by Michael Bruce, and this striking brings back his original licensed artwork for a new collection of collectible silver rounds.

The reverse of the Proof Silver Bitcoin Commemorative round features the same electrical circuit design in the background that is found on the obverse. The lone engravings on this face include Bruce’s initials and a year of issue for the round. These Bitcoin Rounds are not a financial instrument or link to actual virtual currency. These are strictly commemorative pieces!

Your 1 oz Proof Silver Bitcoin Commemorative Round ships sealed in an AirTite capsule for protection and includes a numbered Certificate of Authenticity. Each round has edge-lettering that denotes its individual serial number, which matches up to the COA included with purchase.

Osborne Mint of Cincinnati, Ohio is the production home of these Bitcoin rounds. In addition to the 1 oz Proof Silver Bitcoin Round, America’s oldest private mint struck a 1 oz Antique Silver version and 1 oz Copper version in BU condition.

We encourage Silver.com customers to contact us when buying silver. You can call us at 888-989-7223, chat with us online, or email us directly.