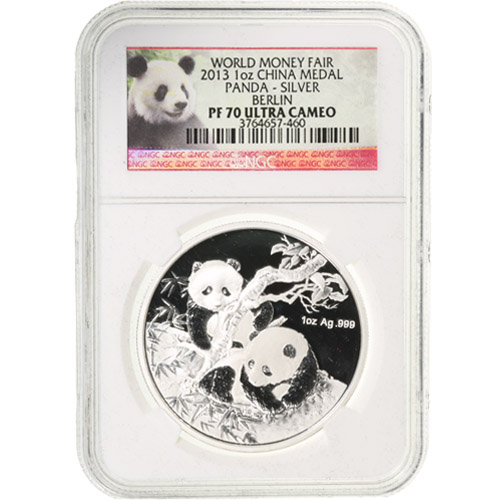 Starting in 1989, the Chinese Mint issued Silver Panda coins as bullion and proof coins for the first time using a standardized 1 Troy oz .999 fine silver content. As of the mid-1990s, the Proof Silver Chinese Panda Coins have featured separate designs of the Giant Panda species on the obverse of the bullion and proof versions of the coins.

On the obverse of 1 oz Proof Silver Chinese Panda Coins is the image of a Giant Panda. This bear species occupies the central highlands of China as their natural habitat and subsist largely on a diet of bamboo. The reverse of Proof Silver Chinese Panda Coins features the Hall of Prayer for Abundant Harvests. This building is the main structure within the Temple of Heaven complex, one of four such complexes in Beijing.

These 1 oz Proof Silver Chinese Panda Coins are available to you in perfect condition. PF70 coins showcase full, original mint luster with no detracting flaws. DCAM coins are deep-cameo specimens and have strong, frosted matte designs and deeply-mirrored, clear background fields. 1 oz Proof Silver Pandas were issued regularly from 1989 to 2015, with 2016 marking a transition to Grams.

In this Silver.com listing, we offer the coins from random years of issue. Your coins are chosen at random when your payment is processed, and if you buy several coins you could receive multiples with the same designs and date marks.

We encourage Silver.com customers to reach out to us with questions at 888-989-7223. You can also chat with us live online or email us directly.