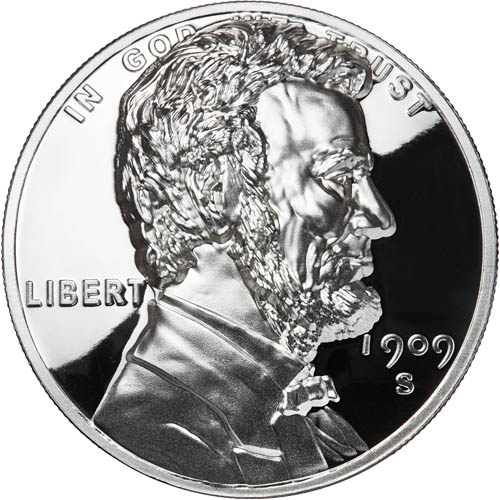 The Victor D. Brennan design on the US penny is the longest-running single design in American history. This right-profile portrait of President Abraham Lincoln was introduced on the one-cent coin in 1909 to mark the centennial of his birth in 1809. The design still features on the obverse of the penny and has been accompanied by three different reverse designs. The original design was the wheat stalk from 1909 to 1958, the Lincoln Memorial from 1959 to 2008, and the Union Shield since 2010.

All 1 oz Proof Silver Domed American Legacy Lincoln Penny Rounds are available to you with a custom-fitted protective plastic capsule to securely hold the unique domed silver rounds. Individual serial numbers are etched on the edge of the rounds and the numbered Certificate of Authenticity comes with the same number.

On the obverse side of 1 oz Proof Silver Domed American Legacy Lincoln Penny Rounds is the image of President Abraham Lincoln. This design is based on the original 1909 design from Victor D. Brennan. Crafted after that same penny, these silver rounds have inscriptions of “In God We Trust,” “Liberty,” “1909” in honor of the debut strike, and an “S” mark representing the San Francisco Mint as the original production mint.

American Legacy Collection silver rounds have domed obverse sides that result in 10 times the depth of the visual elements and enhanced visual intricacy. When viewed from a flat angle, you can see Lincoln’s trademark beard bursting off the surface of the round.

The reverse face of Proof Silver Domed American Legacy Lincoln Penny Rounds includes the opposite design with Lincoln’s bust captured in left-profile relief on the sunken side of the silver round.

Please contact Silver.com with your questions. Our customer service associates are available at 888-989-7223, on the web using our live chat, and through our email address.