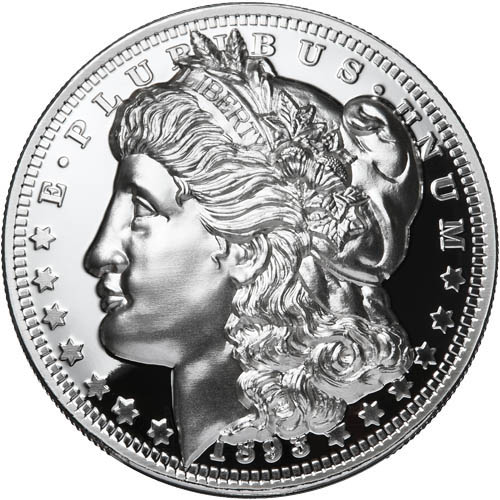 The new American Legacy Collection from the Osborne Mint gives collectors a fresh way to collect and own some of the greatest American coin designs of the 19th and 20th centuries. The four-design series includes the iconic Buffalo Nickel, Morgan Silver Dollar, Lincoln Penny, and Kennedy Half Dollar designs. 1 oz Proof Silver Domed American Legacy Morgan Dollar Rounds are now available to you for purchase online at Silver.com.

The Morgan Silver Dollar is one of the most popular historic US coin designs and was one of the longest-running silver dollar designs. It was released in 1878 by the United States Mint and replaced the Seated Liberty design. It was in production from 1878 to 1904 and halted as silver dollars waned in popularity in circulation.

The obverse of the 1 oz Proof Silver Domed American Legacy Morgan Dollar Round includes the original vision of Liberty created by George T. Morgan. This left-profile portrait showcases Liberty with a wreath crown on her head and the Liberty coronet. Her hair flows back into a loose bun and her figure is surrounded by “E Pluribus Unum,” 13 stars representing the original colonies, and the commemorative “1893” date mark.

Each American Legacy Collection silver round has a domed surface on the obverse side. This allows the Osborne Mint to strike the designs with up to 10 times the visual depth and clarity of detail that other replica proof rounds achieve.

These 1 oz Proof Silver Domed American Legacy Morgan Dollar Rounds ship with capsules custom-fitted to the domed shape of the round. Each round has its own unique serial number etched on the edge and arrives with a matching Certificate of Authenticity.

Silver.com encourages customers to call us at 888-989-7223 when questions when buying silver. We are also available online through our live chat and email address.