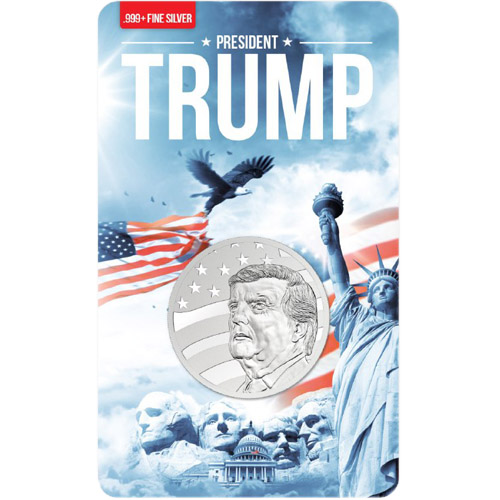 Fresh work on a border wall along the border between the United States and Mexico. A trade war between the United States and China. Fewer regulations on business and tax cuts designed to benefit the pocketbooks of Americans. President Donald J. Trump promised to Make America Great Again and is hoping to continue his work with a second term in office following the 2020 General Election. Today, 1 oz Proof Silver Trump for President 2020 Rounds are available to you online at Silver.com.

All of these 1 oz Proof Silver Trump for President 2020 Rounds are available to you for purchase today with stunning proof visuals. The rounds have frosted design elements overlaying mirrored background fields. Each round is housed in its own display card and comes with a QR code to validate the round. Further, the rounds have a laser-etched serial number on the edge.

On the obverse side of the 1 oz Proof Silver Trump for President 2020 Rounds, you will find a left-profile portrait of President Donald J. Trump. The Commander-in-Chief is shown with the American flag in the background behind him. President Trump was confirmed in August 2020 as the nominee for the Republican Party and will run with Vice President Mike Pence on the ticket with him once again.

The reverse face of 1 oz Proof Silver Trump for President 2020 Rounds is an image of the White House. The official residence and executive office of the President of the United States of America, the White House has been occupied by American presidents since its completion in 1800. The White House has been rebuilt once following the British burning of Washington D.C. during the War of 1812, and has been remodeled and expanded several times over more than 220 years in use.

You can reach out to Silver.com customer service if you have any questions about these silver rounds. Our team is available to assist you on the phone at 888-989-7223, online through our live chat, and using our email address.