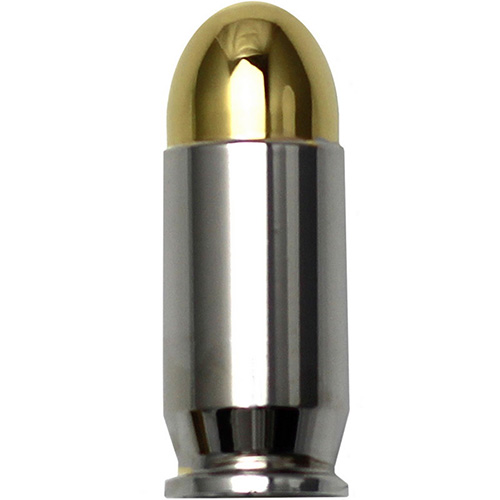 One of the most widely distributed firearm rounds of the 20th century is the .45 caliber handgun round. It was born out of necessity in the late-19th century and would go on to serve as the go-to round for US Military personnel and law enforcement officers in the United States for most of the 20th century. You can now purchase your own .45 caliber silver bullet in the form of 1 oz Rhodium and Gold Plated Silver Bullet .45 Caliber specimens available online at Silver.com.

The .45 Caliber round was designed in 1904 by John Browning and put into production in 1905. The US Cavalry spent the 1890s in search of a replacement for its .38 Colt revolvers and discovered that, in general, greater stopping power was needed for men in the field. Throughout the early 20th century, a lack of stopping power was discovered in primary sidearms in the militaries of both the United States and Great Britain.

Browning’s design of the .45 Caliber round delivered the stopping power the United States Army was looking for, and it was put the test almost immediately after adoption as US soldiers and Marines deployed for World War I on the battlefields of Europe with the new M1911 pistol at the ready.

These 1 oz Rhodium and Gold Plated Silver Bullet .45 Caliber specimens reflect the same size and shape of the iconic round. Each of these silver bullets is available to you with a rhodium plating throughout and a layer of 24-karat gold applied to the bullet portion of the round. The application of the rhodium plating provides a mirrored finish to the entire product.

1 oz Rhodium and Gold Plated Silver Bullets in this product listing come with special presentation packaging from SilverTowne. The bullets are individually housed within boxes.

SilverTowne created these stunning silver bullets as the ideal gift for Father’s Day, or as a great any-day gift for the 2nd amendment lover in your family. SilverTowne opened in Indiana in 1949 and has been serving coin buyers and precious metal investors for more than half a century.

We encourage Silver.com customers to contact us with questions at 888-989-7223. You’ll also find our customer service team available online through our live chat and email address options.