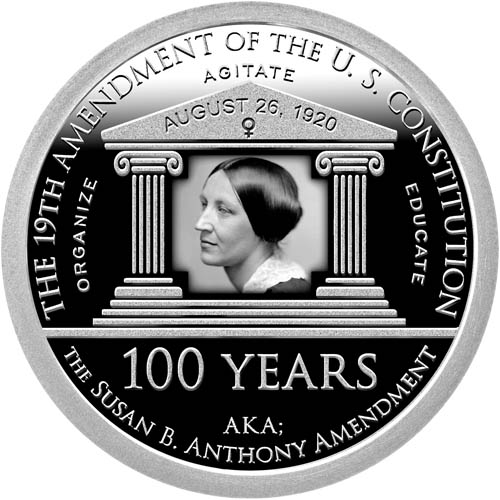 Some of the most impressive collectible silver for sale comes from one-time releases that mark monumental occasions. These rounds have distinctive date marks to highlight an anniversary and often have limited mintages to ensure rarity. A perfect example is the new 19th Amendment 100th Anniversary Round from the North American Mint. Today, 1 oz Silver 19th Amendment 100th Anniversary Rounds are available to you online at Silver.com.

The first bill presented to the United States Congress to alter the US Constitution to give women the right to vote came in 1878. It would be another 41 years before such a bill to amend the constitution would gain enough traction to move through the House of Representatives and the Senate. The bill that would become the 19th Amendment to the US Constitution finally passed the House of Representatives on May 21, 1919, the Senate on June 4, 1919, and was ratified in August 1920.

All of the 1 oz Silver 19th Amendment 100th Anniversary Rounds in this listing are in brand-new condition with proof-like visuals that include frosted elements with mirrored fields. The silver rounds are individually encapsulated in Air-Tite brand capsules and come with unique serial numbers etched on the edges.

The North American Mint produces these limited-mintage silver rounds to mark the 100th anniversary of the adoption of the 19th Amendment. Each silver round has a portrait of Susan B. Anthony on the obverse that was engraved using the mint’s photo-impressive engraving techniques that result in photo-quality engravings.

On the obverse of the 1 oz Silver 19th Amendment 100th Anniversary Round is a depiction of Susan B. Anthony in the center with additional inscriptions of “The 19th Amendment of the U.S. Constitution,” “100 Years,” and “The Susan B. Anthony Amendment.” Anthony, along with Elizabeth Cady Stanton, was a leading female voice in the suffrage movement and a constant activist.

Please feel free to contact Silver.com with questions about these silver rounds. You can call us at 888-989-7223, chat with us live online, or email us directly.