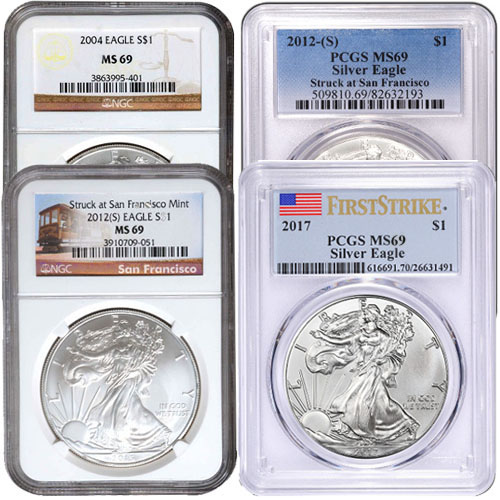 The Silver American Eagle is arguably the most popular silver bullion coin in the precious metals market. These stunning silver specimens are the official silver bullion product of the United States, and are produced annually by the United States Mint in bullion, proof, and burnished versions. Right now, 1 oz Silver American Eagle Coins are available for purchase online at Silver.com in near-perfect condition.

Each 1 oz Silver American Eagle Coin you can purchase here today is in near-perfect condition according to the PCGS or NGC, the two foremost coin grading houses in the world. A Mint State 69 coin exhibits full, original mint luster, but also a maximum of two minor detracting flaws such as miniscule hairlines or contact marks.

The Silver American Eagle coin’s obverse face includes the Walking Liberty image from Adolph A. Weinman. He created the obverse design of Liberty striding toward the setting sun, an American flag draped over her shoulders, in 1916 for use on the nation’s half-dollar coin. It would remain there through 1947 when it was replaced by a portrait of Benjamin Franklin.

On the reverse of all 1 oz Silver American Eagle Coins is the design of the heraldic eagle of the United States. Originally created in 1794 on the very first US coins, this depiction has been modified and refined over two centuries. The latest design comes from John Mercanti, former Chief Engraver of the United States Mint until 2010.

The coins available for your purchase today in this listing come from varied years of production and have varied labels attached within the plastic slab. Silver Eagles have been in production since 1986 at the US Mint, and have never ceased in any year since. Varied labels available include designations of First Strike or Early Release, as an example. These indicate coins received by the PCGS or NGC within 30 days of their given release date in a particular year.

The United States Mint strikes its Silver American Eagle coins, currently, at the West Point Mint. Previous coining occurred at both the San Francisco Mint and briefly the Philadelphia Mint.

If you have any questions, please don’t hesitate to ask. Silver.com customer service team members are available at 888-989-7223, online using our live chat, and via email address.