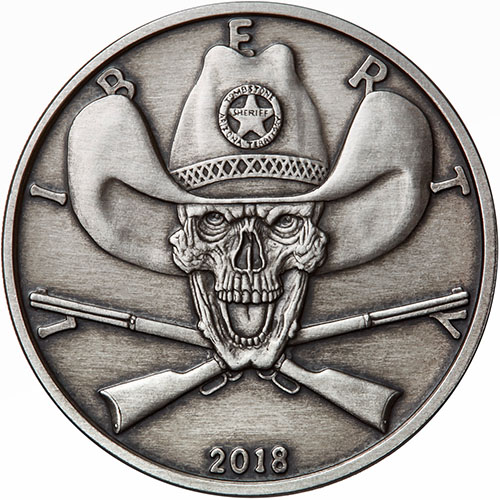 Each 1 oz Antique Silver American Western Skulls Collection Old Sheriff Round has a unique antique polish applied to the obverse and reverse surfaces. This antique polish highlights the more intricate details of the silver design element, while creating heirloom quality in the appearance of these silver rounds.

Your individual Silver Old Sheriff Round from Osborne Mint’s American Western Skulls Collection ships in a protective plastic capsule. The rounds all come with a numbered Certificate of Authenticity that matches the individual serial number found on the round’s edge.

Sheriffs were the highest elected officials in law enforcement for a given state in the Old West. Tasked with keeping the peace throughout individual counties and, in some cases, entire states, the position of sheriff required gusto and character to match that of the miscreants running amok in some of the more far-flung locales of the Old West.

The obverse of all 1 oz Antique Silver American Western Skulls Collection Old Sheriff Rounds features a human skeleton as the sheriff. This skull does have eyes, which are eerie enough to stare through you. The Old Sheriff wears a cowboy hat with his badge in the center and there are two guns crossed below his figure.

On the reverse of all rounds in the American Western Skulls Collection, you’ll notice the fried eagle. This design is a riff on the heraldic eagle that features the American bald eagle behind the national heraldic shield clutching arrows in one talon, and an olive branch in the other. In keeping with the series theme, the bald eagle is replaced by the skeletal remains of an eagle instead.

All rounds in this issue are from Osborne Mint. The mint is the oldest private mint in the United States, tracing its history to the 1830s when President Andrew Jackson was in the White House.