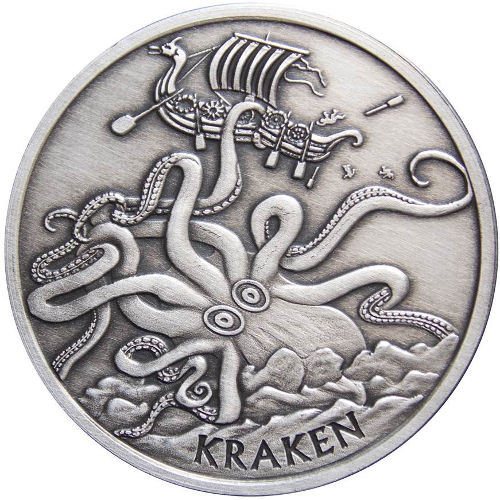 There is no beast from antiquity more fearsome than the fabled Kraken. Believed to live the depths of the ocean and attack ships without warning, there more than seven century’s worth of tales involving attacks by the Kraken, sparking fear in the hearts of Viking sailors in the North Atlantic and the pirates of the Caribbean alike. Right now, the 1 oz Silver Antique Kraken Round from Anonymous Mint is available for purchase on Silver.com.

More and more often investors are turning to rounds, and unique designs such as this one, as a way to invest in silver as they are a great alternative to silver bars due to their low premiums over the silver price per ounce.

Each of these 1 oz Silver Kraken Rounds features a brilliant antique finish. This is an increasingly popular approach by mints around the globe. The process of antiquing applies a chemical treatment to the round prior to striking that gives it the appearance of age with a beautiful patina, without exposing the round to years of wear and tear.

The Kraken was first recorded in human history during the 13th century when Viking sailors in the North Atlantic recorded attacks attributed to the famed Kraken. The beast was alleged to lurk in the depths of the waters between Norway and Greenland, and was often referred to at the time as Hafguga, which means sea mist.

On the obverse of each 1 oz Silver Antique Kraken Round is the image of the massive beast as it emerges from the waters to engulf an unsuspecting Viking longboat. The sailors try in vain to fight off the beast, with some visible falling or jumping from the ship in hopes of surviving the attack.

Anonymous Mint is a small operation that creates truly unique, one-of-a-kind silver and copper products. This antique version of the Kraken round follows the successful release of a traditional proof version, and both were struck with the cooperation of the North American Mint in Rochester, New York.

If you have any questions, please contact Silver.com at 888-989-7223. You can also reach out to us online using our live web chat and email features.