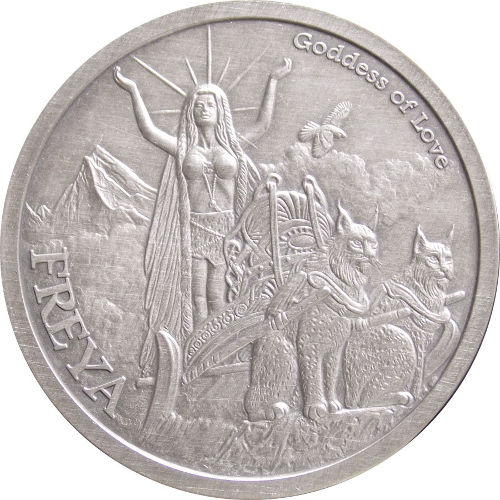 After taking a turn to the dark side in the fourth release, the Anonymous Mint’s Norse God Series of silver rounds features the image of the Goddess of Love. A member of Odin’s Valkyrie and the daughter Njord, Freya oversees love, beauty, sexuality, gold, war and death. Right now, the 1 oz Antique Silver Norse God Series Freya Round is available to purchase on Silver.com.

Norse God Series silver rounds feature a total of five designs, and are available in both 1 oz and 5 oz weights. In this fourth release of the series, the Goddess of Love takes over as the design element. Freya is known to ride in a chariot drawn by a pair of cats, and rides as a leader of the Valkyrie warrior maidens.

On the obverse of these 1 oz Antique Silver Norse God Series Freya Rounds you’ll find the Goddess of Love is shown riding in her cat-drive chariot with her hands raised up toward the sky. As a leader of the Valkyrie, Freya would receive half those who died in battle into her hall, with the rest going to Odin’s hall in Valhalla.

The reverse of this round features the image of another member of the Valkyrie. Known as the Choosers of the Slain, Valkyrie would determine who died and who lived when mankind met on the field of battle to fight over land and wealth. Engravings on this face include “Valkyrie,” “Chooser of the Slain,” and “1 Ounce .999 Fine Silver.”

Anonymous Mint is the development facility in this series, with Osborne Precious Metals providing the production capacity for the program. Both are private facilities, with Osborne claiming the title of America’s oldest operating private mint, tracing its history back to 1836.

If you have any questions, please feel free to contact Silver.com. Our associates are available on the phone at 888-989-7223, online using our live web chat, and via our email address.