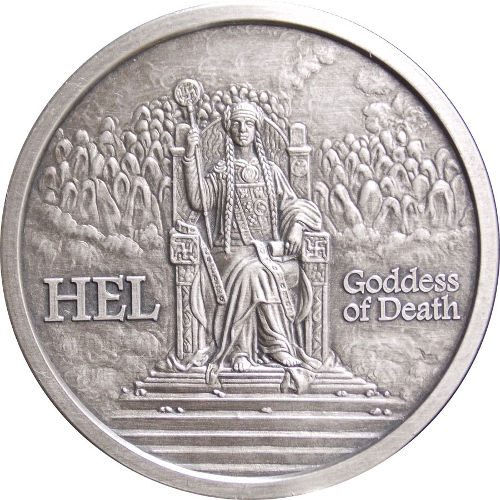 Every form of religion or mythology has those characters who act in the interest of good, and those who are concerned with death and destruction. In Norse mythology, Hel is the Goddess of Death and the guardian of the underworld. In a continuation of the new Antique Silver Norse God Series, Hel appears on her own silver round design. The 1 oz Antique Silver Norse God Series Hel Round is available now on Silver.com.

More and more often investors are turning to rounds as a way to invest in silver as they are a great alternative to silver bars due to their low premiums over the silver price per oz, and unique designs such as this one.

Hel was the daughter of the god Loki, known as a trickster and a danger to gods and man alike. Hel was the third of Loki’s children with the giantess Angerboda. Hel is said to have had stern, downtrodden, and grim looks with half her skin blue and the other half a fleshy hue.

She was sent to the lowest of places in the world by Odin, who had sent for all three of Loki’s children in fear of what they would do if left unchecked in the world. As the Goddess of Death and guardian of the underworld, Hel’s table was famine, her knife starvation, and her threshold a stumbling block.

Each of these 1 oz Antique Silver Norse God Series Hel Rounds is a mirrored, proof product with an antique finish. Antiquing adds the appearance of age to a product without subjecting it to the rigors of handling, wear, and tear.

The obverse of each round in this listing has the image of Hel. She is depicted sitting on her throne, surrounded in the background by throngs of the dead, whom she would release on the world by leaving the gates of the underworld open so the dead could harass the living. Engravings include “Hel” and “Goddess of Death.”

On the reverse of all 1 oz Antique Silver Norse God Series Hel Rounds you’ll find the common Valkyrie design in use on all rounds in the series. The Valkyrie were Odin’s chosen warrior maidens, who rode in the skies above mankind’s battlefields to select who would live and who would die.

Anonymous Mint developed this round series with coin creator Julie Lindquist, and the designs were created on 3D blanks by Luigi Badia using artwork from Howard David Johnson as the inspiration. The nation’s oldest private mint, Osborne Precious Metals, was the production partner for this program.

Please contact Silver.com with any questions by calling 888-989-7223, connect with us online via our live chat, or sending us an email.