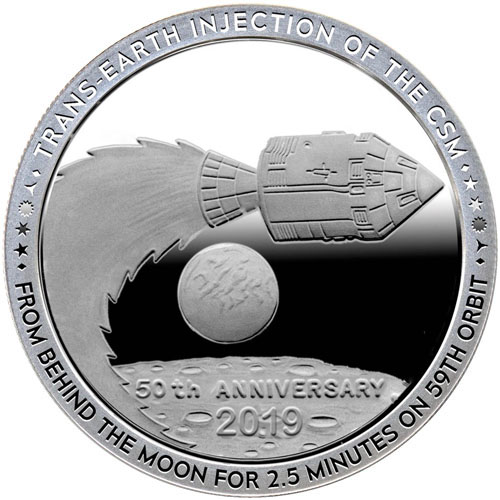 In 1961, President John F. Kennedy addressed a jittery nation wary of the Soviet Union’s success in launching an unmanned satellite into space. President Kennedy challenged the nation and his own government to achieve a goal that would one-up the Soviets and then some. His challenge: send a man to the moon and return him safely to Earth. The astronauts of Apollo 11 achieved this monumental feat 50 years ago and the North American Mint is celebrating in style. Today you can purchase a 1 oz Silver Apollo 11 Earthbound Round as a proof-like specimen from Silver.com.

Apollo 11 lifted off from Kennedy Space Center on Merritt Island, Florida, on July 16, 1969. With a crew of three men on board from NASA, the mission was clear: land on the moon and return safely to Earth. The astronauts of Apollo 11 would spend 8 days, 3 hours, 18 minutes, and 35 seconds from takeoff to splashdown in the Pacific Ocean.

All of the 1 oz Silver Apollo 11 Earthbound Rounds available to you in this listing come with a protective air-tite capsule from the North American Mint. Each round has its own, unique serial number engraved onto the edge and features proof-like visuals including frosted designs and mirrored background fields.

The reverse side of 1 oz Silver Apollo 11 Earthbound Rounds includes the image of an American bald eagle. This eagle is featured landing on the surface of the moon with its wings spread wide and an olive branch in its talons. This very closely resembles the mission insignia and patch used by Apollo 11 crew members.

Please feel free to reach out to Silver.com if you have questions as you buy silver. You can call our customer service team on the phone at 888-989-7223, chat with us live online, or simply send us an email with your inquiries.