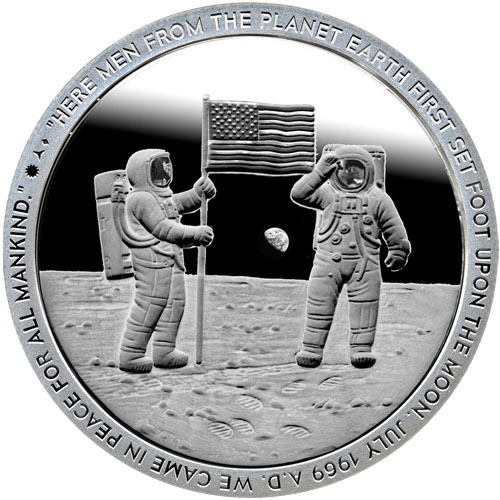 The Apollo 11 mission to space had one goal: put a man on the moon and return him safely to Earth. President John F. Kennedy challenged the nation to meet this goal in 1961 in response to the Soviet Union’s successful 1959 launch of Sputnik. He gave the nation until the end of the decade, and in July 1969, NASA met the challenge in stunning fashion. Right now, 1 oz Silver Apollo 11 For All Mankind Rounds are available to purchase online at Silver.com.

Each 1 oz Silver Apollo 11 For All Mankind Round is available to purchase inside of a protective air-tite capsule to securely house the round and protect its design elements. The rounds in the Apollo 11 Series are proof-like specimens with frosted designs and mirrored background fields. These rounds also have individual serial numbers engraved onto the edge.

The Apollo 11 Series of silver for sale is available from the North American Mint with a total of eight different designs. Each design captures a different stage of the 8-day mission as Apollo 11 lifted off from Merritt Island, Florida to the approach to land on the moon and as the men splashed back down on Earth in the Pacific Ocean.

On the obverse of the 1 oz Silver Apollo 11 For All Mankind Round is the image of Neil Armstrong and Buzz Aldrin. Armstrong and Aldrin were two of the three men in the Apollo 11 crew and the only members to set foot on the moon’s surface. The pair spent 21.5 hours on the surface and one of their final acts was planting an American flag on the moon’s surface. As they did, the men uttered the phrase “We Came in Peace for All Mankind.”

The reverse of 1 oz Apollo 11 For All Mankind Rounds features the common design of the collection. Each one features the American bald eagle landing on the surface of the moon. The eagle clutches an olive branch in its talons and accurately captures the mood as the men stated that humanity came to the moon with peace in mind.