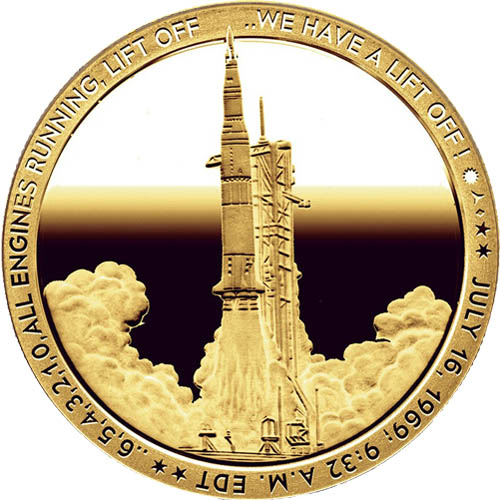 In July 1969, humanity set foot on a different celestial body for the first and only time in history. The three-man crew of Apollo 11 spent a total of eight days in space, with just under 24 hours spent on the lunar surface doing some minor exploring and collecting samples for research. The coveted designs of the North American Mint Apollo 11 Series are now available with gold-plated designs in a secondary release of the collection. Today, 1 oz Silver Apollo 11 Liftoff Rounds are available to you online at Silver.com.

The Apollo 11 mission was the culmination of a decade of work and an answer to a challenge set forth by former President John F. Kennedy. Following the Soviet Union’s successful launch of the world’s first satellite into space, President Kennedy set for a challenge for the nation to use its scientific and financial resources to meet the challenge of taking mankind to the Moon and returning safely to Earth.

All of the 1 oz Silver Apollo 11 Liftoff Rounds available in this listing arrive with an individual plastic capsule. The original design from the Apollo 11 Series, the Liftoff Rounds come with a new 24-karat gold plating on the obverse field for this release. The application of such a thin gold layer does little to increase the precious metal value of the rounds, but greatly enhances the visual quality of the design with its contrasting gold and silver elements.

On the obverse side of Silver Apollo 11 Liftoff Rounds, you will find the image of a Saturn V rocket powering the Apollo 11 craft into space. The launch of Apollo 11 occurred at Merritt Island, Florida, at the Kennedy Space Center. The craft consisted of a command module, service module, and a lunar lander. The lunar lander was aptly named the Eagle, but only the command module would make the return trip to Earth following the mission.

The reverse face of 1 oz Silver Apollo 11 Liftoff Rounds comes with a replica of the Apollo 11 mission patch. The mission patch depicts an American bald eagle landing on the surface of the Moon with an olive branch in its talons. The design features a design of planet Earth in the distant background field with anniversary date marks of 1969 and 2019.

Please feel free to reach out to Silver.com with any questions. Our customer service team is available at 888-989-7223, online using our live chat, and via our email address.