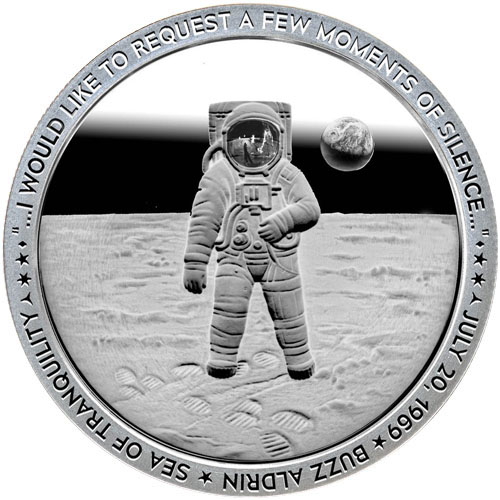 Neil Armstrong and Buzz Aldrin were the first two members of the human race to set foot on the surface of any other celestial body in our solar system. The Apollo 11 mission from NASA had the singular aim of landing men on the moon and returning them safely to Earth’s surface. Today, 1 oz Silver Apollo 11 Moment of Silence Rounds are available to you online at Silver.com.

As Armstrong and Aldrin approached the surface of the moon on July 20, 1969, the Eagle lunar landing module was aimed for a region of the moon known as the Sea of Tranquility. Technically known as the Mare Tranquilitatis, the region consists of basalt formed during the Upper Imbrian epoch and stands out when the moon is visible courtesy of its bluish tint compared to the rest of the moon’s surface.

All 1 oz Silver Apollo 11 Moment of Silence Rounds are available to purchase from the North American Mint in air-tite capsules. The protective capsules securely house your round to protect the design elements and condition. The rounds in this series are available with individual serial numbers engraved on the edges and feature a proof-like finish.

The reverse of Silver Apollo 11 Moment of Silence Rounds includes the image of an American bald eagle as it comes to rest on the surface of the moon. With wings spread wide, the eagle touches down on the moon’s surface holding an olive branch in its talons. This design is based upon the design of the Apollo 11 mission patch worn by the astronauts.

On the obverse of 1 oz Silver Apollo 11 Moment of Silence Rounds is the image of Buzz Aldrin. Though Armstrong was the first man to set foot on the moon, Aldrin was the pilot of the Eagle lunar landing module and accompanied Armstrong on the spacewalk on the moon’s surface during their 21.5 hours on the surface. Aldrin is depicted standing amidst the Sea of Tranquility with the Earth visible in the distance. An engraving around the edge captures Aldrin’s humble request as he took in the sight: “I Would Like to Request a Few Moments of Silence.”