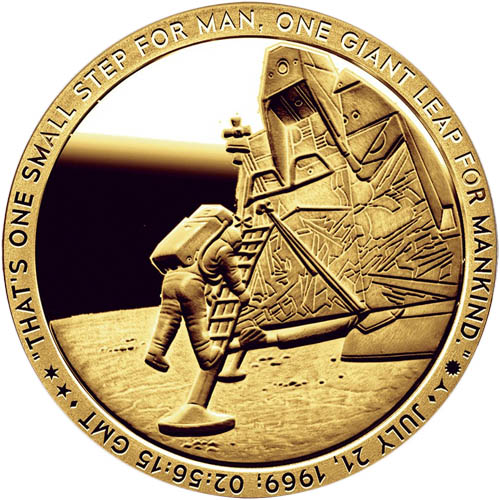 Over the course of eight days in the summer of 1969, three astronauts from the United States of America captivated the nation and the world with their mission to land on the Moon. The men of Apollo 11 lifted off from Florida in July 1969 on an eight-day mission that would see them rocket toward the Moon, descend to its surface, explore, return to orbit, and eventually splashdown safely back on Earth. Now, 1 oz Silver Apollo 11 One Small Step Rounds are available to you for purchase online at Silver.com.

The Apollo 11 mission was one of several manned space flights conducted by NASA during the 1960s, all with the goal of advancing America’s space technology to the point that the nation could send a man to the Moon and return him safely to Earth. Though Apollo 11 finally succeeded in July 1969, it was a mission one decade in the making.

America’s drive to the Moon was spurred by the shocking success of the Soviet Union with its launch of Sputnik, the world’s first orbiting satellite. The Soviet Union’s early success in what became known as the Space Race was a gut punch to the Americans after the US had emerged as an economic, educational, and military powerhouse in the 1950s. President Kennedy responded to the success of the Soviets by challenging the nation to strive for the Moon.

On the obverse of 1 oz Silver Apollo 11 One Small Step Rounds is a depiction of Neil Armstrong. In this design, the Eagle lunar lander has successfully landed on the Moon and the time to step out of the lander’s safety and onto the lunar surface has come. Armstrong is shown descending a short ladder down to the surface.

The reverse side of Silver Apollo 11 One Small Step Rounds offers a vision of the Apollo 11 mission patch from NASA. In the design, an American bald eagle with an olive branch in its talons is shown landing on the surface of the Moon with planet Earth visible in the distant background of space.

These 1 oz Silver Apollo 11 One Small Step Rounds are available as proof specimens with a full 24-karat gold-plated finish. The rounds are packaged inside of protective acrylic capsules and come with a Certificate of Authenticity from the North American Mint. The rounds are limited to just 500 in this re-release and the COA denotes the serial number.

Silver.com customer service can assist you at 888-989-7223. Alternatively, we are available online through our live chat and email address features.