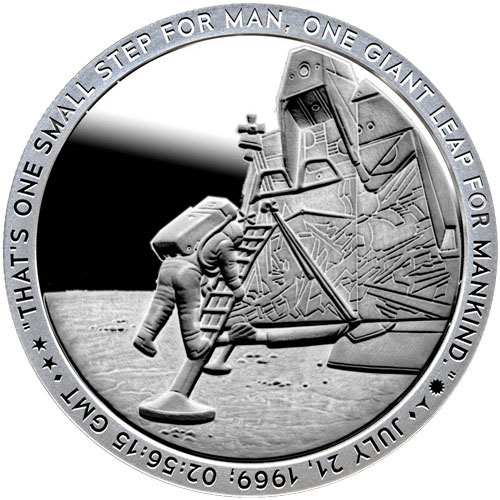 It took four days for the Apollo 11 spacecraft and its crew to reach the surface of the moon from its liftoff at Kennedy Space Center on Merritt Island, Florida. Once the Eagle lunar lander touched down on the surface of the moon, it would be another six hours before the first human set foot on a celestial body other than Earth. Right now, 1 oz Silver Apollo 11 One Small Step Rounds are available to purchase online at Silver.com.

Each 1 oz Silver Apollo 11 One Small Step Round in this product listing is available to you with proof-like elements that include frosted designs and mirrored background fields. The individual rounds have serial numbers engraved onto the edges and arrive inside of protective air-tite capsules from the North American Mint.

Apollo 11 consisted of a three-man crew of mission commander Michael Collins, commander Neil Armstrong, and lunar module pilot Buzz Aldrin. While Collins remained in orbit around the moon inside the command module, Armstrong and Aldrin descended to the moon’s surface inside of the Eagle lunar module. After six hours on the surface, Armstrong would step out first.

The obverse of 1 oz Silver Apollo 11 One Small Step Rounds, you’ll find the Eagle lunar module safely set down on the moon’s surface. With the door open and a ladder down, Armstrong carefully descends to become the first human to touch the surface of another celestial body. As Armstrong took those first historic steps, he uttered the words “That’s One Small Step for Man, One Giant Leap for Mankind.” That iconic quote is engraved around the rim on this side.

On the reverse of 1 oz Apollo 11 One Small Step Rounds is the design based upon the Apollo 11 mission patch. The patch includes the image of an American bald eagle with an olive branch in its talons as it spreads its wings to touch down softly on the moon. Humanity was gifted previously unseen views of Earth with NASA’s success in Apollo 11. Among them, the image of Earth “setting” in the background from the surface of the moon as depicted in this design.

If you have any questions about these silver rounds, Silver.com customer service is waiting to help. You can call us at 888-989-7223, chat with us live online, or email us directly.