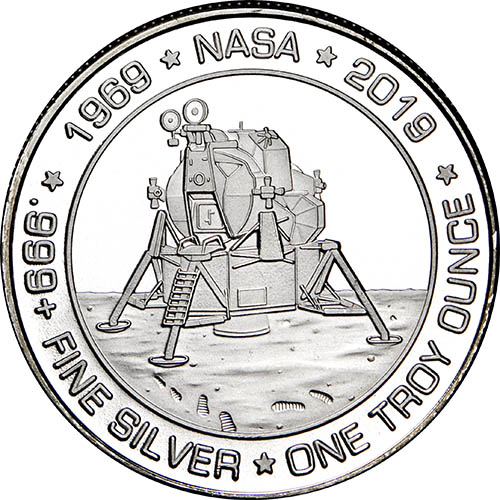 In 2019, America marks the 50th anniversary of the fulfillment of President John F. Kennedy’s promise. Following the Soviet Union’s successful launch of the satellite Sputnik, President Kennedy promised that before the decade was out, the US would “land a man on the moon and return him safely to the Earth.” Right now, 1 oz Silver Apollo 11 Rounds commemorate that achievement and are available to purchase at Silver.com.

Each of the 1 oz Silver Apollo 11 Rounds in this listing has commemorative date marks of 1969 and 2019 on the obverse side to denote the 50th anniversary of this massive achievement. The rounds are available to you in individual packaging or bulk orders. You can purchase 20 rounds at a time in tubes or a Master Box with 500 rounds. The Master Box contains five sleeves, with each sleeve holding five tubes of 20 rounds.

Over the course of eight days in July 1969, America achieved something mankind had dreamed about for centuries: successful manned space flight. President Kennedy promised to send a man to the moon and bring him home, and NASA delivered in July 1969. The Apollo 11 mission lifted off from Kennedy Space Center in Florida on July 16. The crew included command module pilot Michael Collins, lunar lander pilot Buzz Aldrin, and mission commander Neil Armstrong.

On the reverse side of 1 oz Apollo 11 Rounds, you can see a different depiction of this landing. The namesake creature of the lunar lander, an American bald eagle, touches down on the surface of the moon in this design. After eight days in space, the men of Apollo 11 splashed down in the Pacific Ocean on July 25, 1969, and walked right into the history books.

If you have any questions about these silver rounds, please don’t hesitate to ask. Silver.com is available to you at 888-989-7223, online using our live chat, and via our email address.