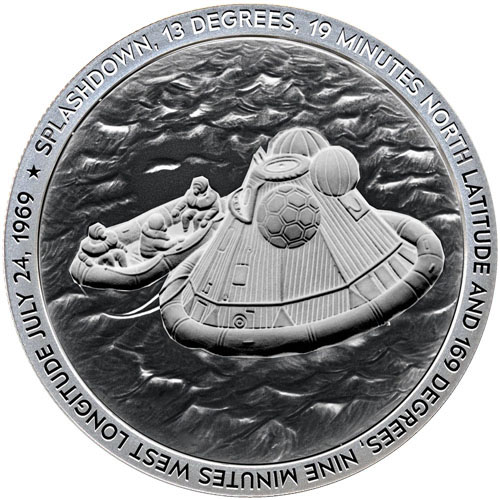 The astronauts on the crew of Apollo 11 embarked on an amazing journey on July 16, 1961, one which would take them from the Atlantic Coast of the United States up to the orbiting moon above and back down to Earth in the distant Central Pacific Ocean. The moment the crew splashed down in the Pacific it marked the successful landing of human beings on another celestial body and their subsequent return to planet Earth. Right now, 1 oz Silver Apollo 11 Splash Down Rounds are available to purchase online at Silver.com.

Each of the individual 1 oz Silver Apollo 11 Splash Down Rounds in this product listing comes to you with a protective air-tite capsule to house the round and protect its beautiful proof-like visuals. Proof-like rounds feature frosted design elements with contrasting mirrored backgrounds. The rounds of the Apollo 11 Series also feature edge-lettered serial numbers.

Apollo 11 lifted off from Merritt Island, Florida and the Kennedy Space Center on July 16, 1969. The three-man crew would spend some eight days in space before returning inside of the Columbia command module. In the days prior to the shuttle program, astronauts from NASA would break through the Earth’s atmosphere inside modules such as this and parachute to rest in the world’s oceans.

The obverse of 1 oz Silver Apollo 11 Splash Down Rounds include the image of the Columbia module with its parachutes at the side and raft inflated to support its weight as it rests on the waters of the Pacific Ocean. The Columbia and its crew were recovered by the US aircraft carrier the USS Hornet and a special crew of recovery team members.

On the reverse side of Silver Apollo 11 Splash Down Rounds is the image of an American bald eagle landing on the surface of the moon with an olive branch in its talons. This design is based upon the mission insignia for Apollo 11 and includes the vision of the Earth in the background field in distant outer space.

If you have any questions about buying silver in this series, please contact Silver.com. You can call us on the phone at 888-989-7223, chat with us live online, or email us directly.