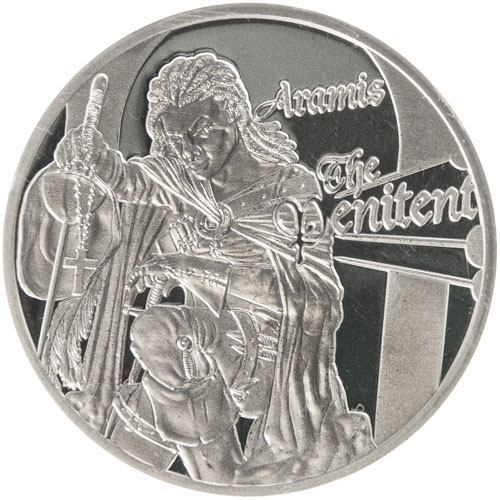 A new collection of silver rounds for sale is available celebrating the famous Three Musketeers. Though Alexandre Dumas’ original tale follows d’Artagnan through his adventures alongside three French musketeers. The modern reimagining of these characters casts each of those musketeers as a female in this silver round collection. Now, 1 oz Silver Aramis Rounds are available to you for purchase online from Silver.com.

Alexandre Dumas wrote The Three Musketeers in 1844 and captured a lot of the political and social mood of France during the mid-19th century in his writing. Though the story was set between 1625 and 1628, many of the themes running through the novel aligned with the issues plaguing France at the time of his writing.

The Three Musketeers follows d’Artagnan, a young many who leaves his home in France to travel to Paris. There, he hopes to become a member of the Musketeers of the Guard. This elite corps of soldiers represents a fighting company that serves as the guard of the household of the King of France and is part of the Royal Household of the French monarchy.

The obverse side of the 1 oz Silver Aramis Rounds features a new image of the fictional character from the Three Musketeers. Cast in this design as a woman, the original character of Aramis was based loosely on a real-life musketeer by the name of Henri d’Aramitz. Aramis is said to have a desire to become an Abbe, the French word for a low-ranking Catholic clergyman. Though he yearns for that role, he enjoys the life of a soldier. The female Aramis depicted here captures that mood with the arches of a church behind her figure as she kneels with a cross necklace in her hand.

On the reverse of Silver Aramis Rounds, you will find the common design element of the series. This visual depicts each of the Three Musketeers in front-facing relief with their silhouettes captured in vague details.

These 1 oz Silver Aramis Rounds are available individually in capsules. Multiples will arrive in tubes of 20 or boxes of 500.