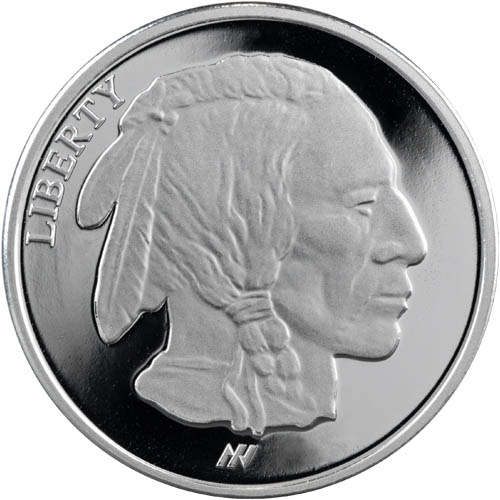 One of the most popular and reproduced designs in the history of the United States Mint is the Buffalo Nickel. Designed in 1913 by James Earle Fraser, it was in production at the mint on the nickel until 1938 when it was replaced by the Thomas Jefferson design still in use to this day. In the 21st century, the Buffalo Nickel has been replicated on gold bullion from the US Mint and silver bullion in various forms from private mints across the US. Today, 1 oz Silver Asahi Buffalo Rounds are available to you online at Silver.com.

The early 20th century saw a massive drive to reimagine coin designs for American currency. Between 1907 and 1909, five denominations of US currency received new designs. These included the designs of the Gold US Eagles in the $20, $10, $5, and $2.50 denominations, as well as the US Penny. The Taft administration decided to continue the work by replacing Charles E. Barber’s design for the nickel, which at the time featured a Liberty Head image. James Earle Fraser was chosen to complete the work in 1911 and his designs, as featured on these silver rounds, were approved in 1912.

All of the 1 oz Silver Asahi Buffalo Rounds available in this listing come to you new from the mint with proof visuals. The proof visuals include contrasting frosted and mirrored fields. The rounds will be shipped individually in protective plastic flips, by multiples of 20 inside plastic tubes, and by multiples of 100 inside of boxes. The box will contain a total of five tubes of 20 rounds each.

The obverse side of 1 oz Silver Asahi Buffalo Rounds comes with Fraser’s depiction of the stoic indigenous figure. This tribal figure is captured in right-profile relief with braided hair and feathers woven into his hair. The design is said to have been created by Fraser with inspiration from three real-world tribal leaders from the early 20th century in America. Reportedly, those figures were Iron Tail of the Sioux, Big Tree of the Kiowa, and Two Moons of the Cheyenne.

On the reverse face of Silver Asahi Buffalo Rounds, you will find the image of a powerful bison. Also known as the buffalo, the American bison species has two recognized subspecies: plains bison and woodland bison. The plains bison is common to the Western United States and Canada, while the woodland bison is now limited in range to Canada.

Please contact Silver.com with your questions. Our customer service team is available at 888-989-7223, online through our live chat, and using our email address.