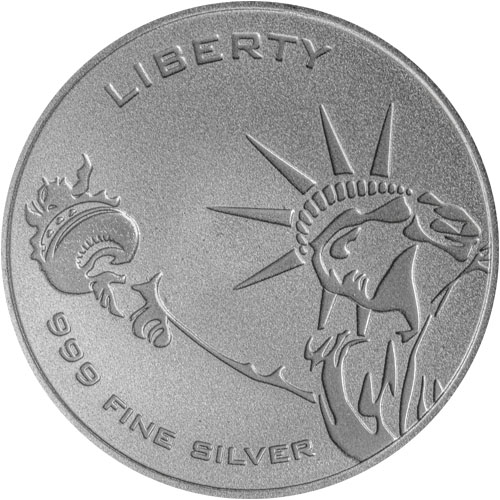 The bald eagle is the largest bird of prey in North America and can be found from the wilderness of Canada throughout the continental United States, and even into the states in northern Mexico. Viewed with a sense of majesty for its massive size and distinctive plumage, the bald eagle was chosen by the Founding Fathers in 1792 as the new nation’s official emblem. To this day, the bald eagle features on countless government emblems and various forms of American denominations.

All of these 1 oz Silver Asahi Freedom Liberty Rounds are available to you for purchase individually or in multiples. The rounds are packaged in protective plastic flips when purchased individually, or packaged in acrylic tubes for multiples of 20 silver rounds. All of the rounds in this listing come to you in brand-new condition.

The obverse of 1 oz Silver Freedom Liberty Rounds comes with a depiction of the Statue of Liberty. In this stunning design, Asahi makes use of negative space in the design field and defines the shape and details of her image with shadowing. The design gives new brilliance to the appearance of the Statue of Liberty, which is visible from a viewpoint as though you were standing at the base of the majestic statue.

On the reverse side of the 1 oz Silver Asahi Freedom Liberty Rounds is an American bald eagle. The bald eagle is shown here in mid-flight as it goes on the attack to quickly, effectively snatch its prey. Flying from left to right across the design field, the eagle swoops its wings back as it extends its talons forward to clutch its prey.

Each of these beautiful Silver Asahi Freedom Liberty Rounds is made with silver sourced from within the United States and was produced by Asahi at its North American facilities.

Please feel free to reach out to Silver.com if you have any questions. You can call us at 888-989-7223, chat with us live online, or email us directly with your inquiries.