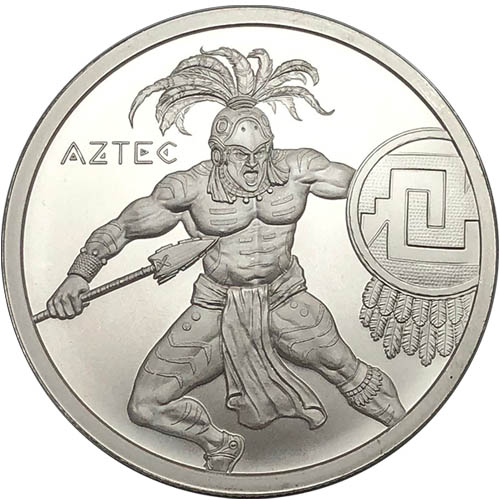 Every good military has well-organized units that blend common foot soldiers with officers to guide them and even elite forces to support them or act in a clandestine manner. The Aztec Empire was no different in the organization of its military forces. The second round design in the Warrior Series from the Golden State Mint features one of the New World’s most elite soldiers. Right now, 1 oz Silver Aztec Warrior Rounds are available to purchase online at Silver.com.

Each 1 oz Silver Aztec Warrior Round is available to you in brand-new condition from the mint. Individual silver rounds are offered with a protective plastic flip, while multiples ship inside of tubes of 20 or boxes of 500 rounds.

The Aztec army had two distinct sets of primary elite forces. The jaguar warriors fought on the frontlines mixed into the regular forces of the army. These elite fighters were praised for the ability to capture enemies by subduing them with superior fighting skills rather than simply killing them. Jaguar warriors were fully cloaked in the skin of a jaguar with only their faces visible.

On the obverse side of the 1 oz Silver Aztec Warrior Round is the image of another of the Aztec army’s elite warriors. Here, you will notice the depiction of a powerful eagle warrior. The eagle warrior was considered the highest-ranking and most prestigious position in the Aztec army. These warriors went into battle with a shield adorned in feathers and a helmet with ornate plumage and the open beak of an eagle.

Eagle and jaguar warriors were the only members of the Aztec army considered full-time, professional warriors. In order to earn status as an eagle or jaguar warrior, individuals had to capture four enemies alive in a battle rather than kill them. To simply kill an enemy in battle was considered clumsy among the Aztec because captured enemies were often used for sacrifice.

The reverse face of Silver Aztec Warrior Rounds includes the image of a Spartan warrior’s helmet. The helmet has the horsehair crest common of an officer in the Spartan army. Behind it, you will find the Dory spear, the Xiphos short sword, and a battle axe.