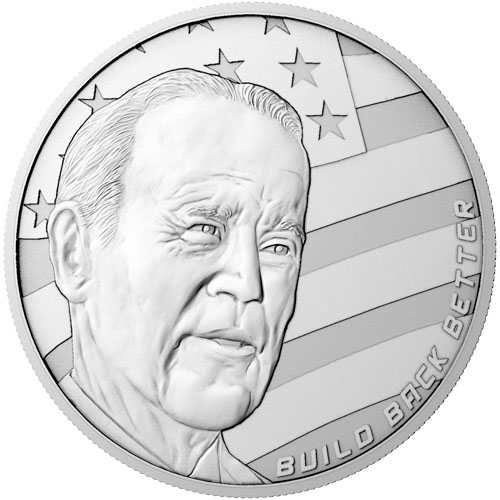 Any quantity available for $4.19 per round over spot!

The 2020 US General Election saw Joseph R. Biden Jr. emerge with more Electoral College votes than sitting President Donald J. Trump. As President Biden takes office in 2021, the Blockchain Mint offers a new silver round design to mark the start of a new American administration in Washington D.C. Now, 1 oz Silver Biden Build Back Better Rounds are available to you for purchase online at Silver.com.

The 2020 US election was weird, to say the least. With the COVID-19 pandemic raging, every state in the nation made some accommodation for Americans to vote by mail. While some states expanded qualifications for who could receive a mail-in ballot, others added drop boxes for people to return ballots. The result of this unique set of circumstances was a delay in the vote tallying that modern American politics has never seen.

After waiting more than a week for official, finalized counts from a number of important swing states, Joseph R. Biden Jr. was declared the victor in the election. According to the final counts, Biden garnered 306 Electoral College votes to 232 for Trump, with 81.268 million votes in the popular vote compared to 74.216 million for Trump. Both men received record numbers of votes from Americans in the popular vote tally.

The obverse side of 1 oz Silver Biden Build Back Better Rounds features a bust of President Joseph R. Biden Jr. The portrait of President Joe Biden captures him in a slight-right-profile relief with the American flag as the backdrop. The slogan representing his economic recovery agenda, “Build Back Better,” is found along the lower-right rim of the design element.

1 oz Silver Biden Build Back Better Rounds are available to purchase new from the mint. The rounds are packaged individually in plastic flips or tubes of 20 rounds.

Silver.com customer service is available to you at 888-989-7223. Alternatively, you can connect with us on the web through our live chat and email address features.