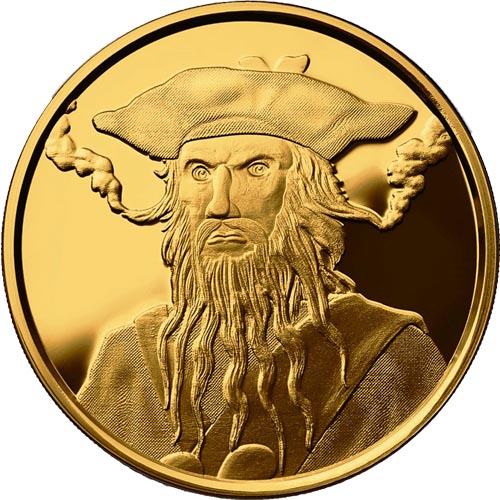 Few pirates were as world-famous as the English pirate known as Blackbeard. A former privateer serving alongside the Royal Navy in the North American theater during Queen Anne’s War. Seeking to make a name for himself and gain wealth, Edward Teach turned to piracy to achieve his goals. Now, 1 oz Silver Blackbeard Rounds with a gold-plated finish are available to you for purchase online at Silver.com.

Born Edward Teach, Blackbeard is thought to have grown up in the British port city of Bristol. In the 18th century, Bristol was one of the largest ports in the United Kingdom. Not much is known about his life growing up in Bristol or even the true origins of his movement to the Caribbean. Most believe he served as either a sailor or a privateer on British ships during Queen Anne’s War, part of a series of French and Indian Wars in North America between the empires of Great Britain, France, and Spain.

Blackbeard began his life of piracy in 1716 when he joined the crew of Captain Benjamin Hornigold, a pirate based on the island of New Providence in the Bahamas. Blackbeard’s first command was on a sloop that Hornigold had captured and given to him. The two terrorized the Caribbean together before Blackbeard captured a French slave-trading ship named La Concorde. He would later rename it Queen Anne’s Revenge.

On the obverse side of 1 oz Silver Blackbeard Rounds is a depiction of the famed pirate himself. Wearing his pirate’s hat with lit fuses woven into his hair, his long beard was the source of his nickname. Blackbeard was famous for wearing a bandolier across his chest with as many as four pistols in and carried two swords at all times. He would go into battle with lit fuses in his hair and beard, giving off the air that he was a beast from the belly of hell itself.

The reverse field of Silver Blackbeard Rounds comes with a replica of the flag he flew from the mast of Queen Anne’s Revenge. The flag featured a skeleton raising a glass in a toast to the devil as the figure wields a spear he is ready to thrust into a heart.

These 1 oz Silver Blackbeard Rounds are available to you for purchase brand new from the Anonymous Mint. The rounds are beautiful specimens that boast a 24-karat gilded layer across both the obverse and reverse design fields. Each round is housed in its own protective capsule.

Silver.com customer service is available to you on the phone at 888-989-7223. We are also available online using our live chat and email address features.