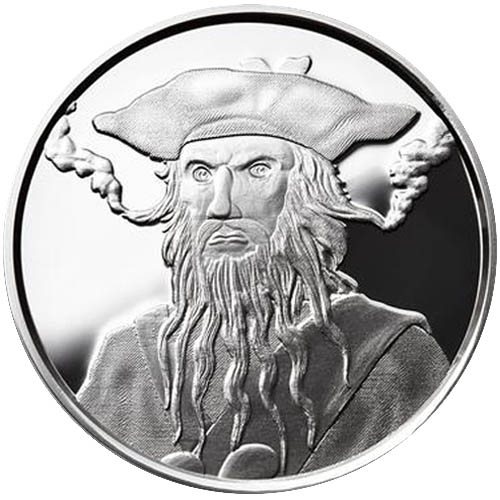 Born under the humble name of Edward Teach in 1680s England, the man many would come to know as Blackbeard lived a violent life through most of his adulthood and eventually went out in a blaze of glory at the end of his career as a pirate. Anonymous Mint has a stunning design for a silver round release that features the legend that was Blackbeard. Today, 1 oz Silver Blackbeard Rounds are available to you online at Silver.com.

Everything about Blackbeard was designed to strike fear in his enemies at the mere sight of him and his ship. Born as Edward Teach, Blackbeard gained his name for the long, thick black beard that grew on his face throughout the course of his career as a pirate. He would often weave lit fuses into his hair and beard, given him the appearance of the devil himself with fire coming from his face as he went into battle with his pirate force. He was armed to the teeth for each confrontation, personally carrying two swords, several small knives, and a bandoleer across his chest that held as many as four flintlock pistols at a time.

All of the 1 oz Silver Blackbeard Rounds in this product listing are available to you in brand-new condition from the Anonymous Mint. The rounds are packaged individually inside of protective plastic flips.

Blackbeard is depicted on the obverse side of the 1 oz Silver Blackbeard Rounds. This image is one of the most common of Blackbeard. Though he’s been depicted in various works of art since his life on the high seas, one of the common elements is a thick beard. Many works of art show him wearing a two-pointed hat with lit fuses coming from his hair underneath. This design includes those fuses with smoke rising from the fuses.

The flag flown by Blackbeard’s ship is shown on the reverse field of Silver Blackbeard Rounds. His flag depicts a skeleton raising a toast to the devil as it spears a heart in the lower corner. This is the flag Blackbeard would often fly above his flagship, the Queen Anne’s Revenge.

Please don’t hesitate to reach out to Silver.com if you have any questions about silver for sale. Our team is available to you at 888-989-7223, on the web through our live chat, and via our email address.