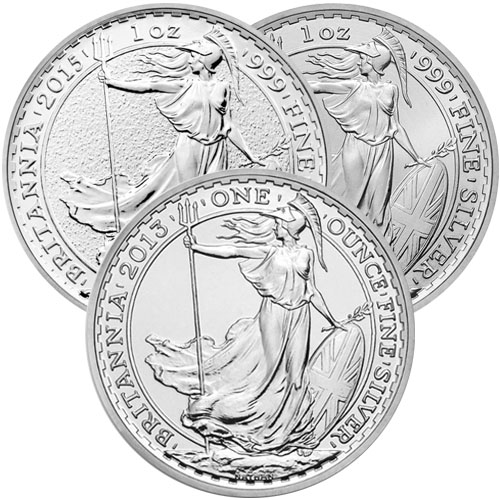 The Silver Britannia coin series is one of Europe’s most popular coins. Struck at the Royal Mint of England, these coins are the official silver bullion coins of the nation and offered in gold as well as silver. Right now, 1 oz Silver British Britannia Coins are available to purchase online at Silver.com from varied years of issue.

Today, Silver.com offers the 1 oz Silver British Britannia Coin for sale online from varied years of issue. Debuting in 1997, the Silver Britannia has been struck in every year since. Silver.com cannot guarantee the exact year of issue you receive. The date mark of your coin will depend upon availability in our warehouse when your purchase is processed for shipment.

Silver Britannia coins come with a variety of possible changes based on year of issue. First, those coins struck from 1997 to 2012 have a silver content of .958. Coins issued from 2013 onward have an improved .999 fine silver content. Additionally, the portrait of Her Majesty, Queen Elizabeth II varies by issue year as well. All individual coins are in plastic flips, but multiples arrive in tubes of 20 or 25 coins. Older date marks are available with tubes of 20, while newer issues in the series have 25 coins per tube.

The 1997 1 oz Silver British Britannia Coin is unique in that it is the only year of issue in the series to feature the Raphael Maklouf third-generation image of the Queen. Maklouf’s portrait captures the Queen as a “symbol that is regal and ageless.” Silver Britannia coins struck from 1998 to 2015/2016 include the fourth-generation effigy from Ian Rank-Broadley. His design is said to capture the Queen with idealization and greater realism.

Silver Britannia coins offered from 2016 onward have the latest fifth-generation image of Queen Elizabeth II. Here, Her Majesty is captured again with realism like Rank-Broadley’s but with features that capture her age as of the mid-2010s more accurately. Engravings on this face of the coins include the Queen’s name and the year of issue.

On the reverse of all 1 oz Silver British Britannia Coins is the design of Britannia. A symbol of Britain and its people for more than 2,000 years, this design comes from Philip Nathan and made its debut on the Gold Britannia in 1987. It depicts Britannia with a Corinthian cap, trident, and a shield with the Union Jack logo upon it.

If you have any questions, please don’t hesitate to ask. Silver.com customer service is available to you at 888-989-7223, online using our live web chat, and via our email address.