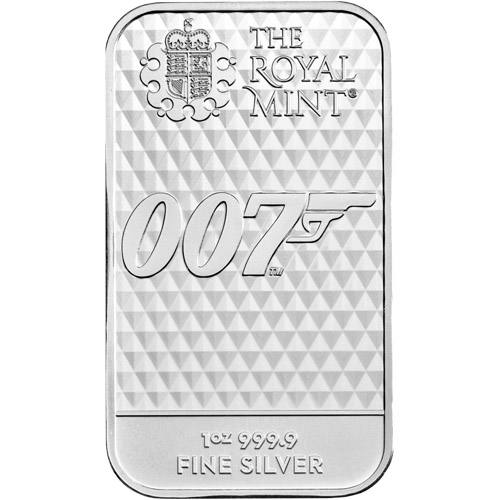 Eon Productions has produced far more James Bond feature films than any other entity. Since the release of the first Bond film in the 1960s, Eon has had the rights to produce official James Bond films. The first man to step into the shoes of the fictional British secret agent was Sean Connery, who reprised his role in 1971 in Diamonds Are Forever. Now, 1 oz Silver British James Bond Diamonds Are Forever Bars are available to you for purchase online at Silver.com.

In 1971, the producers of Diamonds Are Forever were in search of a new actor to play the role of James Bond. Sean Connery had played the role through the first five consecutive films, but stepped away after You Only Live Twice in 1967. In 1969, George Lazenby stepped into the shoes of Bond, but appeared only once in On Her Majesty’s Service before stepping aside himself.

Connery was lured back to the role in 1971’s Diamonds Are Forever when United Artists insisted that the film move forward with Connery or no one. He was offered a sum of $1.25 million for the part, a sum that was a record at the time. This would be Connery’s sixth and final appearance as Bond in an Eon Productions film, but not his last appearance overall. In 1983, he made his seventh and final appearance in Never Say Never Again.

In the obverse design of the 1 oz Silver British James Bond Diamonds Are Forever Bars, you will find the logos of both the Royal Mint and the 007 franchise. The mint logo comes with a coat of arms, while the 007 logo offers the familiar numbers with a handgun built into the 7 in the logo. The identifying hallmarks of the bar are found at the bottom of the field.

For the reverse field of Silver British James Bond Diamonds Are Forever Bars, you will find a beautiful cascade of diamonds. Each one is larger than the last as the diamonds fall down the reverse field of the bars. The name of the film is found on this side as well, with the word FOREVER repeating down the design field in an ever-smaller font.

These 1 oz Silver British James Bond Diamonds Are Forever Bars are available to you online at Silver.com with sealed protective plastic. This bar is the smaller of two silver options in the series and one of three options for investors.