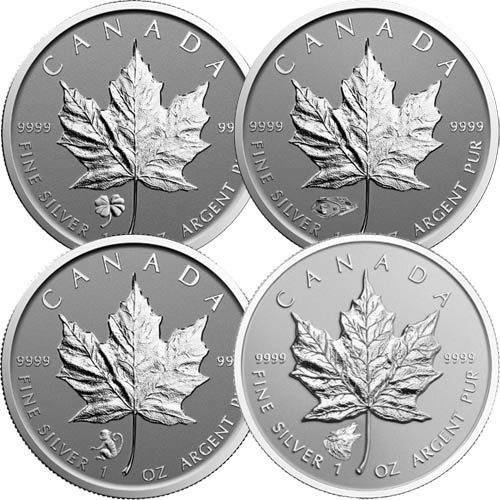 Please note that these coins come in uncirculated condition, which can include items with toning, milk spots, or slight contact marks.

The Silver Canadian Maple Leaf was the first silver bullion coin in the world to feature .9999 metal fineness. Introduced in 1988, the coin has been available in a 1 oz silver option in every year since that time with the same designs. On occasion, the Royal Canadian Mint has issued the coins with beautiful privy marks to denote special occasions. Right now, 1 oz Silver Canadian Maple Leaf Coins with varied privy marks are available to purchase online at Silver.com in varied conditions.

Each of the 1 oz Silver Canadian Maple Leaf Coins in this listing comes to you with a protective plastic flip. The coins in this listing come from limited-issue privy mark commemorative releases. Each one is a standard Silver Maple Leaf bullion coin from its particular year of issue, but the privy marks on the reverse separate them as part of a limited-issue release by the RCM. The condition of these coins can vary in this listing, but most will have similar flaws such as white spots, contact marks, or other minor detracting flaws.

Silver.com offers you the chance to purchase these coins today at random. We’ll select your coins once your payment has been processed. We cannot hand pick a particular date and privy mark for you, and if you buy multiple we cannot select various different date and privy marks to provide variety. All coins are chosen at random.

On the reverse of 1 oz Silver Canadian Maple Leaf Coins in this listing is the sugar maple leaf. Designed by Walter Ott in 1979, it has featured on the gold, silver, platinum, and palladium versions of the coin in every year since their respective debuts.

The obverse of these Silver Canadian Maple Leaf Coins will feature one of three possible portraits of Queen Elizabeth II. Arnold Machin’s second-generation portrait appears on 1988 and 1989 coins. Dora de Pedery-Hunt’s third-generation design appears on coins dated between 1990 and 2003. All coins with a date mark of 2004 or later have Susanna Blunt’s fourth-generation effigy of Her Majesty.

If you have any questions, please contact Silver.com. You can call us on the phone at 888-989-7223, chat with us live online, or email us directly.