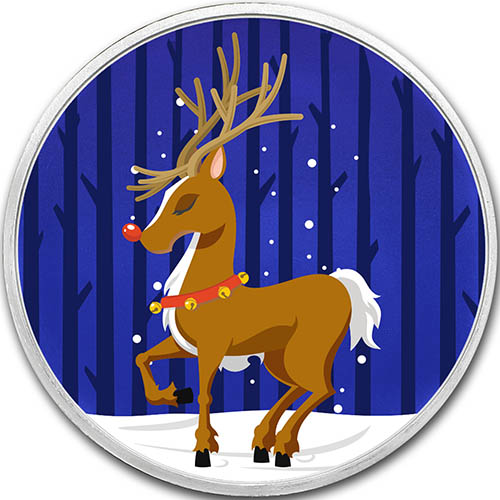 The concept of Santa’s sleigh being guided by a crew of flying reindeer is entirely a creation of American authors. Though Santa is built on the history of characters such as Saint Nicholas and Sinterklass, it wasn’t until the early 1820s that American authors gave Santa the power of flight and the guidance of reindeer. The 1 oz Colorized Silver Rudolph Round celebrates his most famous and is available to you for purchase online at Silver.com.

Saint Nicholas and Sinterklass rode valiant white steeds on their way to do good deeds, but American authors gave Santa Claus the power of flight. He is said to have whisked over treetops in a flying sleigh. Though not immediately stated in 1821, the first stories suggested that he had a team of flying reindeer.

It would be another century before Rudolph joined that gang of flying reindeer. Written into Christmas lore by Robert Lewis May, the 1 oz Colorized Silver Rudolph Round depicts the only reindeer in the group with a special power beyond flight. Mocked for his shining red nose in his youth, Rudolph would save the day eventually. Good thing May changed his mind from early naming ideas of Rudolph. Rollo and Reginald don’t have quite the same ring!

On the obverse of the 1 oz Colorized Silver Rudolph Round is a colorized depiction of Rudolphe the red-nosed reindeer on a winter’s night. The colorization of the round features dark blue and black hues in the background, while Rudolph’s bright red nose and brown fur stand out in the foreground.

May created Rudolph in 1939, and he has subsequently been depicted in various tales, movies, and TV specials. Depending on who you believe, he is either the son of Donner or Blitzen. Either way, his glowing red nose saves the day by lighting the way for Santa’s sleigh one dreary Christmas Eve.

The reverse of the Colorized Silver Rudolph Round doesn’t have the vibrant, colorized finishes of the obverse. However, it does feature engravings of “One Ounce” in the middle, and “.999 Fine Silver” in an arch along the bottom rim of the design field.

We encourage all Silver.com customers to contact us with questions. You can reach out to us on the phone at 888-989-7223, connect with us on the web using our live chat feature, or send us an email with your inquiries. The price of silver per ounce is constantly updated on our homepage as well!