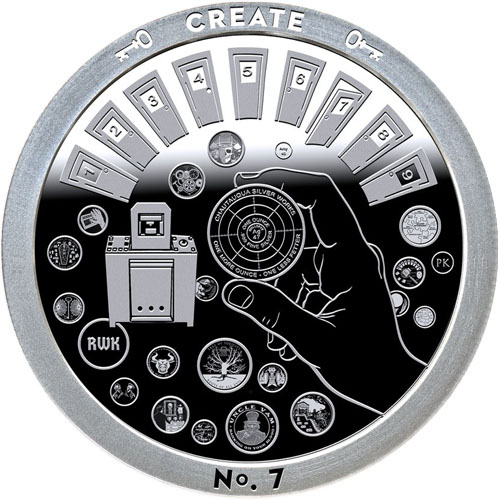 Create is the latest release in the Through That Door Series from the North American Mint and Chautauqua Silver Works. The nine-design series features some of the most unique obverse silver round designs you’ll find, along with a common reverse element. What is unique about release number seven is the appearance of the reverse design on the obverse of these silver rounds! Now, 1 oz Silver Create Rounds in the Through That Door Series are available to you for purchase online at Silver.com.

Each one of the design releases in the Through That Door Series is unique and distinctive. While each one can be connected to the other with a common theme that challenges the mind and points to the concept that you never know what is coming next in this life. As such, the Create design showcases the same concept by showing off the first designs on the obverse of various collections the North American Mint and Chautauqua Silver Works have collaborated on.

Even though each design is distinct, there are commonalities across the issues from the Through That Door Series. For example, the outer design ring features the name of the release between two keys at the top of the rocker. Also featured on all designs are the nine doors in an arch, each one representing a new design.

The obverse of the new 1 oz Silver Create Round in the series features that arch of doors with the “7” door ajar, indicating it is the design number the series has reached. Within the round’s design field, you will find a coining press with countless different designs available that have been created by these two precious metals firms. Designs featured in the field include the first issues in the TIME Series and the Ounce of Prevention Series that North American Mint and Chautauqua Silver Works collaborated on.

These 1 oz Silver Create Rounds in the Through That Door Series are available to you brand-new with proof-like visuals that include frosted design elements and mirrored fields. The rounds are all housed individually inside of protective capsules and feature edge-lettered serial numbers.

Silver.com customer service is available to you at 888-989-7223. You can also connect to us online through our live chat and email address features.