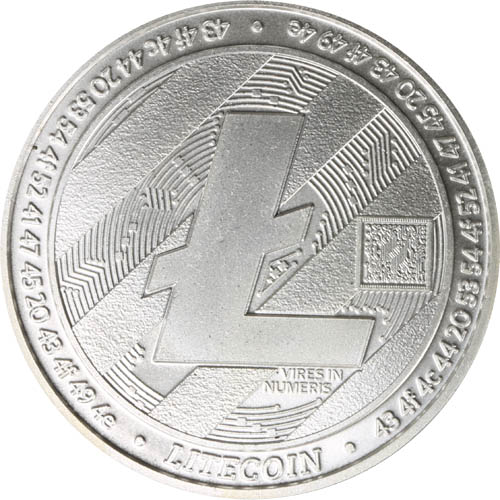 Since the introduction of Bitcoin in 2009, crypto currencies have taken the world by storm. While Bitcoin still dominates the headlines and garners a lot of attention in this niche, there are other so-called altcoins available to those who want something different than Bitcoin. Litecoin was introduced in 2011 as the first major altcoin to challenge Bitcoin and offer an alternative in the realm. In that same year, the first collectible silver rounds honoring altcoins were released. Today, 1 oz Silver Crypto Commemorative Litecoin Rounds are available to you online at Silver.com.

When it comes to the technical aspects of Litecoin, it is very similar to Bitcoin. You would have to dig down to the real nitty-gritty to find any of the technical differences. Among the slight differences between these two major forms of crypto currency are the block generation time and the maximum number of coins. For example, Litecoin’s block generation time is just 2.5 minutes.

Obverse design elements of the 1 oz Silver Crypto Commemorative Litecoin Rounds include the crypto currency’s symbol as the primary feature. Like other forms of crypto currency, Litecoin uses a single, capital letter with a dash through it as a common symbol. In particular, the Litecoin symbol consists of a capital “L” with a diagonal dash through the longer, vertical line of the letter. The background field is hashed with various lines set at an angle. Alternating lines expose an additional background element meant to reflect the appearance of computer hardware.

There are two distinctive differences between Litecoin that set it apart from Bitcoin. The amount of time it takes to process a transaction in the public ledger with Litecoin is four times faster than Bitcoin, allowing for one transaction every 2.5 minutes compared to one every 10 minutes for Bitcoin. Similarly, the maximum number of Litecoin available is four times greater than Bitcoin at a total of 84 million Litecoins.

Reverse features of 1 oz Crypto Commemorative Litecoin Rounds showcase a popular design created back in 2011. This design is, like the background elements on the obverse, meant to reflect the appearance of computer hardware, such as processor chips. However, this design has a history. It was used on the first-ever Bitcoin Rounds introduced in 2011.

Please contact Silver.com if you have any questions. You can reach our team on the phone at 888-989-7223, online using our live chat, and via our email address.