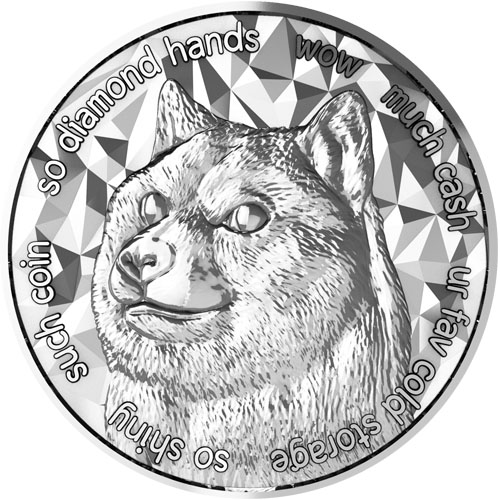 Few could have imagined that an Internet meme could have inspired one of the many forms of crypto currency. Dogecoin, introduced in 2013 shortly after the “Doge” meme became wildly popular, remains the most affordable option for those looking to switch from fiat currency to crypto currency. Now, 1 oz Silver Dogecoin Rounds are available to you for purchase online at Silver.com.

The two set out to create a form of crypto currency that was more accessible to the masses and more affordable. Dogecoin debuted December 19, 2013, with an initial value of $.00026 (USD) per unit. During the WallStreetBets-fueld short squeeze and market volatility in early 2021, Dogecoin saw its value skyrocket as celebrities like Elon Musk and Snoop Dogg Tweeted about Dogecoin. Currently, its value is much higher than at release, but still remains around just $.05 per unit.

A Shiba Inu is featured on the obverse of the 1 oz Silver Dogecoin Rounds. Inspired by the Doge meme, the Shiba Inu from the meme is replicated at the center with several inscriptions in broken English that are meant to reflect how a dog’s thoughts might come out in the English language.

A circuit-inspired design is found in the reverse design element of Silver Dogecoin Rounds. This design first appeared on a crypto currency round in 2011. Though simple in nature, it is meant to reflect the all-virtual nature of crypto currencies.

The Blockchain Mint is Southeast Asia’s leading private mint. Located in Singapore, it is known for releasing designs inspired by pop-culture and finance sector themes.

Silver.com customer service is available to assist you with any inquiries at 888-989-7223 when you buy silver. Our team is also available to you online using our live chat and email address features.