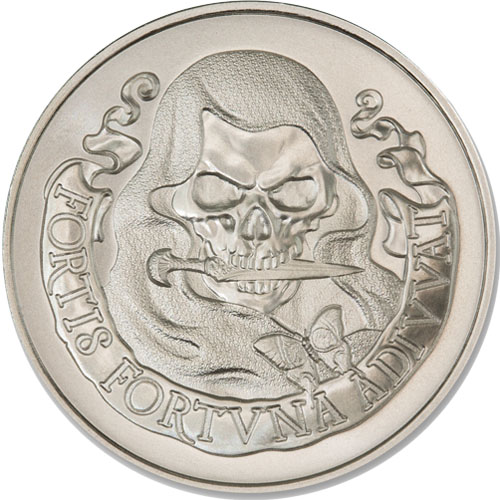 When faced with long odds or a seemingly-certain defeat, warriors throughout the ages have fallen back on the proverb that “fortune favors the brave.” This ancient Latin phrase of Fortis Fortuna Adiuvat literally translates as “fortune favors the bold,” but terms such as brave and strong have been used interchangeably over the centuries to complete the phrase or fit a given scenario. Now 1 oz Silver Fortis Fortuna Adiuvat Rounds are available to you for purchase online at Silver.com.

The oldest reference to this Latin phrase comes from Cicero, who cited the phrase as “Fortune favors the brave” in the 1st century BCE. He labeled the phrase as a Vetus proverbium, or old proverb. Throughout the ancient world, the phrase was retooled and reworded to fit various scenarios, individuals, and ages of human civilization.

For example, Terence’s comedy play, Phormio, used the exact phrase Fortis Fortuna Adiuvat in line 203 of his play. Another writer of the ancient world, Ovid, parodied the phrase in his didactic work, Ars Armatoria, twisting it slightly to read in English as “Venus, like Fortune, favors the bold.”

On the obverse of 1 oz Silver Fortis Fortuna Adiuvat Rounds is a depiction of a hooded figure. This bold figure is but a skeletal figure wearing a shrouded hood over his head. Between his teeth, he clenches a dagger with a small butterfly on the lapel area of the hood. There is an ornate, curled banner with the phrase “Fortis Fortuna Adiuvat” inscribed.

The reverse side of Silver Fortis Fortuna Adiuvat Rounds comes with the Intaglio Mint seal. The seal of the mint comes with a Romanesque column in the shape of an “I” for the logo at the very center. The center of the seal has the mint name and a beaded border, with the primary background field boasting a twisted radial line set. The inscriptions around the edges of the design field identify the weight, purity, and metal content.

1 oz Silver Fortis Fortuna Adiuvat Rounds are available to you for purchase in either plastic flips or plastic tubes of 20 silver rounds. The rounds are all available in brand-new condition.

Silver.com customer service is available to assist you at 888-989-7223. Our team is also available on the web using our live chat and email address features.